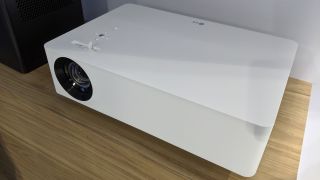 In amongst it's 8K TVs and transparent OLEDs, LG is showing off a new addition to its projector range at CEDIA Expo 2019, the LG HU70LA CineBeam.

The model represents a more affordable alternative to the company's ultra short-throw projectors, retailing at $1799 for a maximum 140-inch image. It uses a four-channel LED light source, with red, green and blue being boosted by a fourth LED for increased brightness and contrast.

There's support for 4K, HDR10 with Dynamic Tone Mapping and LG's TruMotion technology. Thanks to LG's webOS 4.5 platform inside, there's access to popular streaming apps including Amazon, Netflix and YouTube.

The LG HU70LA CineBeam 4K LED projector is due on sale in October, costing $1799.