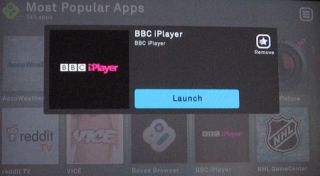 Boxee has collaborated with the BBC for the first time on a new look iPlayer interface for its Boxee Box streaming media device.

The company has also announced a partnership with video on demand service Blinkbox and revealed plans for the Boxee iPad app.

BBC iPlayer was previously available to Boxee Box users via a third-party developer but the company has now worked with the BBC to deliver a fresh interface with complete access to the service.

Meanwhile Blinkbox, a free and pay-per-view on demand video service, will come to Boxee in the UK later this year.

Boxee has also released initial information on the Boxee iPad app, which is due to be submitted to Apple for approval any day.

The app will allow any Boxee content to be viewed on an iPad, as well as giving access to friends' content and delivering further home streaming functionality.

Read our review of the Boxee Box.