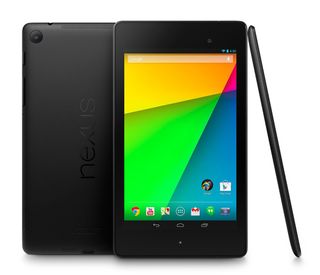 The battle to be the best tablet of 2013 has once again featured the two biggest names.

In our new dedicated tablets category, we awarded two best-in-class awards: with the new Google Nexus 7 representing tablets up to 8 inches, and the Apple iPad 4 in the over 8 inch section.

We loved the original Nexus 7, which Google released last year, effectively creating a new category. It claimed an award for its low price and portability.

This year is no different and the new Nexus 7 once again claims victory. Google has again shown that premium products need not come with a premium price tag.

With a gorgeous, full HD screen, the latest iteration of Android and an improved processor, the Nexus 7 (2013) walks away with product of the year. But with the likes of the iPad Mini 2 and the LG G Pad looming, it looks set to remain a competitive category...

Apple meanwhile reigns supreme in the over 8-inch category, and it's hardly surprising.

With a visually stunning Retina Display, Apple's own A6X processor, and the high build quality and overall performance we've come to expect, it was always going to take some beating.