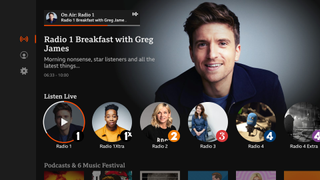 BBC Sounds is now available as a TV app. The mobile version of the app replaced BBC iPlayer Radio in October 2018.

The BBC Sounds TV app launches today on Virgin and YouView devices (including some Sony TVs) and will come to some Samsung TVs later this week ahead of a wider rollout.

The new app gives you access to over 80,000 hours of audio content on your TV, including live and on-demand radio from the BBC's 18 national and 40 local radio stations, as well as music mixes and podcasts.

When BBC Sounds launched on mobile devices, it was much complained about due to bugs and a lack of features - here's hoping the TV app runs a little smoother.

Some BBC radio stations are already available through connected TVs, but this app brings more content and a new way to listen. The BBC claims almost 10 percent of radio listening is done on TVs, so there's clearly a market for a hub for all its content.

The new app offers a personalised experience. Sign in, and it can recommend content based on what you've already been listening to. You can carry on listening where you left off, even if you were previously listening on your smartphone or computer.

Already bookmarked some shows or mixes through BBC Sounds on another platform? These will show up on the TV app once you've signed in.

You can browse by category, and it will show live track information when you're listening to a live station and full track listings for music mixes and on-demand shows.

Worried that your seven-hour marathon of That Peter Crouch Podcast will leave an image of his face inked on your screen? No problem. The app has a screensaver that should save you from screen burn.

"The new TV app is another way the BBC will be there for people through the current challenging times, giving listeners access to all of our brilliant audio through a few clicks of their TV remotes,” said Jonathan Wall, controller of BBC Sounds.