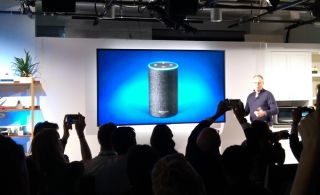 Amazon has launched two new Echo speakers - a new Echo and the Echo Plus - with a focus on sound quality and multi-room audio.

The Echo speakers feature Dolby audio for the first time and will be available in a variety of multi-device starter packs for an out-of-the-box multi-room music system.

In a flurry of product launches, Amazon also revealed the Echo Show, which features a video screen and is already available in the US, would be coming to the UK. It will cost £199.99, though you'll be able to save £100 if you buy two.

There's also the Echo Spot. A completely new Amazon Alexa device, the Echo Spot aims to reinvent the bedside clock, bringing voice control and video calls to a compact sphere. It will cost $129 in the US and is due out in the UK in 2018.

The Echo Plus looks more like the original Echo but promises "better bass, better treble", plus a "smart home built inside". This smart home alludes to the ability to control multiple smart devices with just one Alexa command.

We're live at the Amazon event in Seattle and will be finding out more - and getting a first impression of how they sound - later today.

The original Amazon Echo launched in the US in 2015, before arriving in the UK a year later. Priced at $179.99/£149.99, the Echo has been listed as unavailable since the end of August amidst rumours of an Echo 2.

Following the launch of the Echo, the Amazon smart speaker family was bolstered by the smaller Echo Dot, £49.99, which is now on its second generation. In the US, Amazon has also released the portable Tap Bluetooth speaker and the screen-toting Echo Show.

And Amazon is no longer the only name in the smart speaker game, with the Google Home on sale now, and the likes of the Apple HomePod and Sony LF-S50G on the way.

Here are all the many, many smart speakers on show at IFA 2017