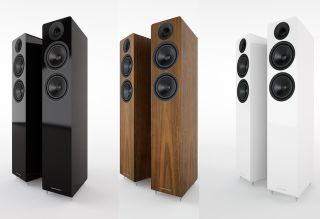 The Bristol Sound & Vision Show was the stage on which Acoustic Energy unveiled its AE1 Active speakers last year, and next week it’s returning to the annual West Country show to launch its all-new 300 Series speaker range.

An important event for Acoustic Energy fits in the middle of that timeline: its resurrection (and expansion) of its entry-level 100 Series speakers last summer - the first product launched after the company’s return to British ownership (it was purchased from its Malaysian parent company, Formosa Prosonic Group).

And now we have a speaker range that builds on the 100 Series’ technological groundwork.

The newly-developed 28mm aluminium dome tweeter features the Wide Dispersion Technology waveguides introduced in the 100 Series models, while the 13cm aluminium mid-bass driver (of which the AE309 has two) has been re-designed with a ceramic shallow-profile aluminium sandwich cone and a long-throw motor system.

The 2.5-way AE309 floorstander has mass material at its base for extra damping, as well as floor spikes to help reduce resonance and improve stability.

Available in March, the AE300 and AE309 will cost £599 and £1099 respectively. A new AE307 centre speaker and AE308 subwoofer are due to follow in the summer, so those interested in a 5.1 surround package will have a few months to save up.

Magico conjures up its most affordable speakers yet