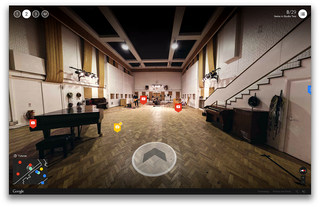 The Inside Abbey Road website is accessible for free on desktop, tablet and mobile and gives anyone with an Internet connection the chance to take an in-depth tour around the studio complex.

The site features more than 150 panoramic, 360-degree images, taking in Studio One, Studio Two, Studio Three and the Mastering suite.

A map guides you around the Abbey Road complex, with colour-coded dots leading you to the content, which also includes plenty of information on the studio building, from the iconic red chairs (not just any chairs, you'll discover) to the acoustic treatments used to ensure the quality of the sound.

The site also gives you the chance to get your cursor on some vintage equipment in specially-designed interactive gadgets, including the J37 4-track recorder that was used to record the Beatles’ Sgt. Pepper’s Lonely Hearts Club Band.

You can find your own way around Inside Abbey Road or be guided by producer Giles Martin, engineer Mirek Stiles, or BBC Radio 6 Music presenter Lauren Laverne, each of whom offers their own interactive tour.

The studios were opened in 1931 by Elgar and the LSO - there's footage of that on the site, too - but this is the first time the studio has been (virtually) opened to the public.

Head over to Inside Abbey Road site now to take a tour.