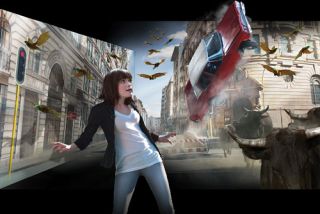 3D TV is dead and 4K Ultra HD TV already matters far more than 3D ever did, according to the controller of production for BBC North.

Mark Harrison, reporting his findings from CES 2013 for Broadcast, stated that Ultra HD TV, along with smart TV, was the star of this year's show – and that together they sounded the death knell for 3D TV.

"Last year, some still insisted you couldn’t operate in the future without a pair of 3D glasses, but now the specs are being reserved for gaming and movies at the cinema," Harrison said.

"3D’s place has been taken by 4K, or Ultra HD. We are years away from being able to make and transmit in 4K, yet it matters far more than 3D ever did: it enables manufacturers to focus on making bigger, better, normal TVs."

While the prevalence of Ultra HD TVs was undeniable, and the relative quiet around 3D TV certainly noticeable, a huge bank of 3D screens at the entry to the LG stand plus Philips' 60in glasses-free 3D TV, amongst other 3D screens, showed there was still manufacturer interest.

The comments raise questions over the BBC's commitment to delivering 3D content. As it stands some 3D content has aired on the BBC HD channel, though the meagre amount of Olympics coverage in 3D left some disappointed. The Sky 3D channel remains the only dedicated 3D channel in the UK.

Content for the next generation of Ultra HD TVs remains a similarly sticky subject however, though the first 4K Ultra HD channel has now gone live and Sony has other ideas for its TVs.

Harrison suggests that this, making 4K Ultra HD content, will be the focus: "That means that while budgets get tighter, the need to make high-quality digital output that can hold its own on a screen next to on-demand 4K movies will ensure production remains ambitious."