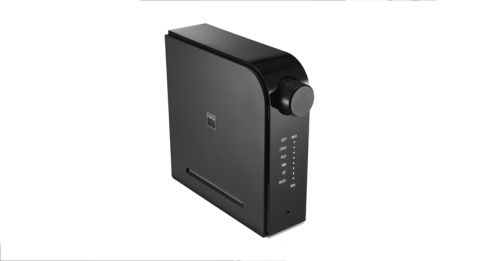 NAD's first attempt at the D 3020 won a What Hi-Fi? Award - and the V2 lives up to its predecessor's hype

NAD ignored a number of rules when it released the original D 3020 amplifier.

If using Class D amplification wasn’t enough of a thumbing of the nose to traditional designs, its chassis looked positively futuristic. It stood upright with dimensions wildly unbefitting of ‘proper’ hi-fi.

The D 3020 was unlike anything else on the market - and it sounded great. And its successor, the D 3020 V2, has the latter point in common with it.

Essentially, this V2 is a slicker, classier-looking version of the amp. It features the same glossy curvature and similarly chunky dial, yet somehow still it succeeds in making its predecessor seem dated.

In fact, there’s an argument to say this version of the D 3020 is harking back to the past. Aside from its retuning and refining of the original, NAD has kitted the amp out with a moving magnet phono stage to reflection of the rise in vinyl sales over the past few years.

Otherwise it’s more-or-less as was, with those turntable inputs sharing the rear of the unit with connections for optical, coaxial and RCA, the optional subwoofer out remaining alongside those for traditional stereo speakers, and Bluetooth also keeping its place.

The presentation is tonally even, but with great body to the sound.

A bass boost is available via the amp’s credit-card style remote and, while the natural balance is far from lacking at low end, that optional increase is tasteful - it plumps up those bottom frequencies without softening or fatiguing the performance.

Detail levels are impressive by class standards, as the D 3020 V2 refuses to let its modish aesthetic be a trade-in for sonic insight - its observations about Kamasi Washington's take on Clair de Lune are acute.

Painting broad but textured strokes across its sizeable canvas, it never allows itself to lose sight of the wider painting as it stitches each instrument into the landscape.

What makes this NAD so likeable, though, is its combination of timing and dynamics, which, while undeniably (marginally) bettered elsewhere by more traditional hi-fi, offer a real sense of the enthusiasm and enjoyment to be derived from The Elgins' Heaven Must Have Sent You.

Its timing, for example, may not snap into place martially, but it locks into a groove well enough to entertain and doesn’t become confused even as rhythms begin to multiply as they do with Fela Kuti's Colonial Mentality.

Likewise, the D 3020 V2’s dynamic sense is not among the greatest we’ve encountered for sheer range, but its contouring of a melody or dose of impetus to a leading beat is wholly musical.

MORE: The best stereo amplifiers you can buy

If your search is solely based on a ‘performance-for-pound’ criteria, then Marantz is an equally compelling avenue for you to explore. But if you can find another digital amplifier with this many features, which is this easily accommodated, and sounds better for the money, then we’d love to know about it.