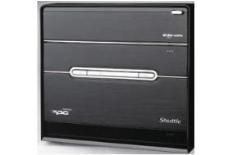 It’s not much of a technical step forward, but the XPC HD is still the best media centre we’ve seen – and it’s cheaper now

I.US has replaced its two-model series of XPC media centres with three new models, and the most exciting news is that prices have gone down.

The XPC HD, which consists of a 1TB (1000GB) HDD hard disk alongside a Blu-ray drive and DVD drive, is £500 cheaper than the previous version.

Sensible cuts have been made, with I.US dropping HD DVD playback, and the Freeview tuners are now a cost option.

Other specs, such as the Intel Core 2 Duo processor, 2GB of RAM, and Nvidia GeForce 8500 GT graphics card, are the same, as is picture performance – so the Hitman Blu-ray still looks crisp and detailed. Colours are balanced, motion is smooth, blacks are deep and whites are bright.

Hitman's DTS HD Master Audio soundtrack (which, along with Dolby True HD, is decoded onboard and sent out via analogue outputs) is also impressive, with enough punch to add excitement to the otherwise shoddy film.

Budget players look almost as good
Some might bemoan that you can't get HD audio via HDMI, and that you have to exit Media Center to watch a Blu-ray, but neither is the fault of I.US.

A slightly bigger problem comes from the latest generation of Blu-ray players – even budget models reviewed here push the I.US in terms of picture performance.

However, the extras that you get here (media streaming, internet, e-mail, vast storage) mean it justifies the price, but we do expect to see more of a jump in performance with the next series.