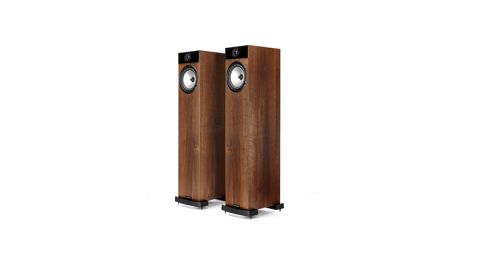 It’s two out of two so far for Fyne Audio, with the F302 never in any danger of falling short of five stars

Homonyms hold the key to around 90 per cent of Dad jokes, and for that we must be grateful to our language for their existence. But when it comes to Fyne Audio, the fledgling Scottish company’s rhyme-sake doesn’t describe its brilliance quite aptly enough.

Though in its infancy as a brand, Fyne’s seven-strong management team represents a kind of supergroup of industry minds. It has more than 200 years of experience - and delivers results that actually total the sum of its parts, if the first of its loudspeakers to arrive in our test rooms are anything to go by.

And if that tantalisingly low £400 price-tag doesn't already have you rushing to dig out your credit card, we won’t be surprised if you’re already entering your bank details by the end of this review.

A two-way, rear-ported design, the F302s house a 25mm polyester dome tweeter and 15cm multi-fibre mid/bass driver in each of their relatively sturdy cabinets.

With the plinths adding a little more width to the overall footprint, it feels you’re getting a lot of speaker for the money - even though you won’t be greasing the sides to squeeze them in to your living room.

The F302s are available in walnut, black ash and light oak finishes – described by Fyne as ‘superior vinyl’. These are understated finishes, offset by a glossy black headband framing the tweeter.

There is further detailing surrounding the bass/mid driver too, though more than mere aesthetic flourish, this tyre-like design aids solidity and makes it more difficult to distort, in a similar fashion to twisting or folding a sheet of paper.

Uncomplicated in design, their performance sets the F302s apart as immediate class-leaders.

We listen to every song from beginning to end - an acid test passed only by the most engaging products to cross our path, and there’s no greater praise we can offer Fyne Audio than that.

We play Bon Iver’s 22, a Million and from the outset we’re met with a confident, forward presentation - but one that has all the detail and refinement we might expect from the best standmounters at this price.

The texture in those opening vocal loops offers a sense of movement and anticipation over a flatlining drone, and quite luscious warmth to Justin Vernon’s trademark choral harmonies. The presentation also feels spacious, with plenty of dimensionality both in terms of width and depth.

The size of the cabinet suggests a wealth of low-end, but bass is taut and doesn’t obstruct the F302s’ keen rhythmic sense.

Timing and dynamic range are often neglected characteristics in floorstanders at this price – they often favour power, bass and a grander soundstage instead – so it’s worth highlighting just how adept the Fynes are at capturing both.

That means harnessing the grimy percussive loops of tracks such as 10 d E A T h b R E a s T, while allowing 29 #Strafford APTS to trickle downstream without fear of becoming stagnant. It builds the intensity of 8 (circle) nicely as it reaches its anthemic conclusion.

These tracks also highlight how adept the F302s are at capturing the production as well as the character of the music.

With synthesizer and vocal alike sodden in almost 80s levels of reverb, the tone changes entirely with the following number ­___45___, a dry presentation of breathy saxophone harmonies that the F302s are self-assured enough to throw front and centre.

The contrast would not perhaps need to be this stark for us to recognise it, nor for us to enjoy our time spent with these speakers - but it is indicative of the kind of insight and analysis that's quite rare in this price bracket.

It’s a more mature performance than we were expecting, even having heard what Fyne is capable of further up the food chain.

If there is one caveat, it is that some care needs to be taken with system matching. While the balance is far from skewed, there is a little brightness in the treble that should be tempered by pairing with a suitable amplifier and music source.

At this price we’d recommend something such as Marantz’s PM6006 amp, which will complement the F302s’ innate strengths while rounding off some of that top end, perhaps with the company’s CD6006 as a source.

That said, even testing with our Cyrus CDi/Rega Elex-R combo, each of which can highlight any treble coarseness, was a delight. So it’s more a case that you’ll get the best from these speakers with some careful matching, rather than being forced to avoid them without.

It’s rare to find floorstanding all-rounders at less than £500 able to compete in every respect with the wealth of quality standmount speakers available at the same price.

Which only serves to demonstrate just what a sterling job Fyne has done with the F302s.

If our F501 review had your mouth watering, but put your bank account in peril, Fyne has provided with another class-leader. One that belies its extremely reasonable price tag at every turn.