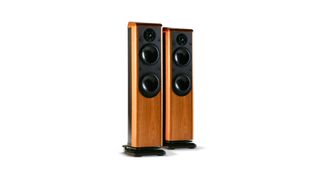 In celebration of our High End Week, we are revisiting one of the most eminent, high-end products that have featured in our 'That Was Then...' series, which contextualises and somewhat compares a new product to the first in its company's lineage. Here the focus is on Wilson Benesch’s latest entry-level speakers, the Precision P1.0s, and the company's A.C.T. One from the '90s. Enjoy!

Wilson Benesch made a splash back in 1991 with its first products, the imaginatively titled Wilson Benesch Turntable and its partnering tonearm, the A.C.T. One. Those initials stand for Advanced Composite Technology, and carbon fibre is at the heart of these products. The turntable uses the material in its sub-chassis and the arm flaunts it in a beautifully shaped armtube, the impressive rigidity, low mass and good self-damping giving them something different over rivals.

Even today, the use of carbon fibre is considered pretty exotic, but back then there were just three other UK companies capable of producing the composite parts: Lotus Racing and two specialists working for the Ministry of Defence. That’s quite some company for a start-up high-end hi-fi brand to keep.

Then, rather than following a predictable path and releasing a more affordable record playing option, Wilson Benesch introduced the A.C.T. One floorstanding speakers in 1994; they grabbed the headlines thanks to their use of curved carbon fibre flanks. The front baffle was a 10mm thick solid aluminium slab, which provided an exceptionally rigid foundation for the drive units to work from.

Originally, these speakers used a drive-unit complement fully sourced from Danish OEM drive unit manufacturer Scanspeak. There was the highly regarded D2905 soft-dome tweeter together with a pair of larger 17cm drivers used in mid/bass and bass roles. The mid/bass unit was ported through the rear of the cabinet, while the bass port fired downwards onto the plinth.

Those larger drivers used hot compacted polypropylene cones, claimed to be significantly stiffer and better damped than the standard polypropylene alternatives. These 17cm units were later swapped out for in-house engineered Tactic designs, which made a significant improvement to outright clarity and dynamics.

Our heritage A.C.T. One samples are factory supplied units and have been upgraded to Tactic spec. Twenty years on from launch, they still look modern, just requiring a more contemporary finish for them to pass as current. Their slim proportions are elegant, and the combination of carbon fibre, wood and metal adds up to speakers that look classy and expensive, but in an understated way.

Build quality remains a high point, and the cabinet feels immensely rigid and made with care. The floor spikes fitted to the Ones are considerably larger and sharper than most and will have no difficulty in getting through the thickest of carpets and on to the hard floor below. They feel properly engineered, much like the rest of this product.

We like that Wilson Benesch didn’t just fit a standard set of speaker terminals. Those on the A.C.T. Ones are single-wired, carefully machined and provide a good, solid contact point for our speaker cables. They’re also hidden under the plinth, which makes things neater but is a bit of a pain if you use thick, unwieldy speaker cables.

We ran a pair of A.C.T. Ones as our reference speakers during the early 2000s, and listening to these samples brings back good memories. In our original review we described them as pure, transparent and effortless, able to combine analysis with being musical in a way that eludes most rivals.

Listening to them now confirms these findings. These towers are hugely capable, even by modern standards, which is a testament to the quality of engineering involved in the original design.

We play Beethoven’s Piano Sonata and these speakers respond with finesse and dynamic dexterity. They define the edges of the piano notes well and have enough harmonic resolution to render individual notes convincingly. The presentation is a little richer and warmer than we remember, but convincing all the same. Their surefooted nature, delicacy and punch are readily apparent. While not the last word in rhythmic precision, they convey the changing momentum of a piece of music well, communicating the emotional content effectively.

We recently reviewed Wilson Benesch’s latest entry-level speakers, the Precision P1.0s (£5995, $8800), and comparing the two models is fascinating. The most obvious difference is that the P1.0s are small standmounters and the A.C.T. One is a tower. The advantage in having a greater internal volume gives benefits in terms of greater low-end authority and loudness capability. Using twin 17cm drivers helps in these areas too. But it’s not just one-way traffic.

The newer design sounds considerably cleaner and crisper. Its aluminium and birch-ply cabinet seems to contribute even less to the sound than that of the Ones. The Precisions are impressively transparent, uncovering layers of low-level detail in a natural manner. The originals reveal lots of detail, but seem a little rounded and less forensic overall.

The P1.0 also sounds incredibly agile and responsive. The lack of contribution from the cabinet helps of course, but we’re sure the upgraded Tactic II mid/bass driver and in-house 25mm Leonardo soft-dome tweeter helps too.

It’s no surprise that the newer design is the more revealing and insightful – but that doesn’t stop us admiring the originals, which set the engineering template for Wilson Benesch’s subsequent designs.

Both are transparent and detailed performers, capable of delivering sound in an insightful, and musical manner – not a bad legacy for a company that started off as a turntable specialist.