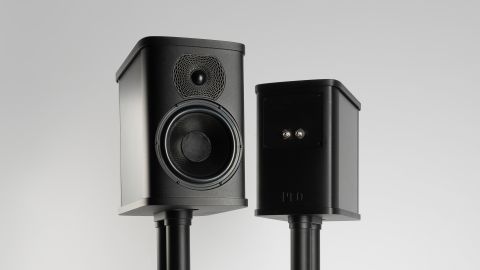 The Precision P1.0s are exceptional standmounters that deliver a class-leading performance with a suitably capable system

Entry-level is a relative term. In Wilson Benesch’s world, it refers to the new Precision range, made up of three models – the P1.0s on test here and the two floorstanders above them, which top out at £14,995 for the four-driver P3.0 towers.

The P1.0s are the babies of the range, both in terms of size and price. They’re about as big as a couple of stacked shoeboxes and have an internal volume of just short of 14 litres. They’re also deceptive in that the stands are an integral part of the structure. You could describe them as floorstanding standmounters.

While the P1.0s come in at the bottom of the company’s range, there’s no sense of compromise in the engineering and technology content. It’s something made clear by the fact that the hand built 17cm Tactic II mid/bass driver used here is identical to that used in the company’s range-topping £140,000 Eminence. That’s the kind of sharing we can get behind.

This mid/bass driver is an innovative in-house design that uses an Isotactic Polypropylene cone claimed to deliver an ideal balance between rigidity and damping. The cone is built into a high-pressure die-cast chassis and driven by a powerful, heavily optimised Neodymium motor system. Much work has gone into honing the magnetic behaviour of the motor. A downward firing port helps to tune the low frequencies.

The 25mm soft dome Leonardo tweeter is just as impressive. It’s a development of the Semisphere high frequency unit used in the company’s well-established (and much pricier) Geometry series, and uses the same Neodymium motor system. The clever bit here is the tweeter faceplate, which is elaborately shaped to minimise any distortion caused by reflections of the dome’s sound output. The result should be a flatter frequency response.

This faceplate pattern is so complex that it can only be manufactured by 3D printing. It’s made of a carbon-reinforced polymer and decoupled from the main baffle to reduce any distortions generated by the mid/bass unit’s vibrations.

Wilson Benesch has long promoted simple crossover networks and those used in these speakers are no different. The tweeter rolls in at around 5kHz and is fed through a minimalist second order filter. Unusually, the mid/bass doesn’t use any filter at all, being directly connected to the speaker terminals. The company feels these clean signal paths help to maintain integrity.

While most rival designs use reinforced MDF boxes for the enclosure, Wilson Benesch has rarely been happy doing so. The P1.0s’ enclosure is a hybrid construction of aluminium and birch plywood that is braced, damped and held in tension to create an exceptionally rigid but low resonance platform for the drive units to work from.

We’re not fans of the P1.0s' brutal appearance, particularly in the standard black finish, but there’s no denying the effectiveness of the speaker’s elaborate construction. These are expensive speakers and the build standards are appropriately high too.

Should the all black finish not appeal, these standmounters are also available in white, or black with the side panels in either burgundy or graphite for a £495 price premium.

Speakers at this level demand a suitably stellar system – they can only reproduce the signal fed to them, after all. We use Naim’s ND555/555PS music streamer and Technics SL-1000R turntable as sources, with Gamut’s D3i/D200i pre/power for most of the test, swapping in Leema’s excellent Tucana II Anniversary integrated amp on occasion.

The Precision P1.0s prove relatively unfussy about positioning. While a close-to-wall placement adds bass emphasis it also thickens the midrange and reduces the speaker’s openness. We settle with the WBs further out into our test room, slightly angled towards the listening position. Unlike some rivals, that angling isn’t massively critical thanks to the P1.0s' even dispersion characteristics.

We are surprised to find that we don’t warm to these speakers at first. Despite showing obvious talents, our review samples sound timid and lacking in dynamic expression during our initial audition. These issues slowly fade over a week’s worth of use, and the Precisions become something that can stand alongside the very best at this level without fear.

These are compact speakers, so don’t expect to get the kind of bass that rattles your furniture. But they do well for their size, delivering lows that are taut and agile. We play Neneh Cherry’s Spit Three Times and the WBs deliver the song’s hard-driving bassline with gusto, each note reproduced with punch and texture.

We note the P1.0s’ surefooted sense of rhythm and their ability to separate each musical strand without losing sight of the whole. This is a cohesive, dramatic performance, but also one that keeps a firm grip on the subtleties, particularly in the way that they capture Cherry’s distinctive and passionate vocals.

We move to Dvorak’s New World Symphony and the Precisions sound right at home. Something this size will never get close to reproducing the full authority of an orchestra, but the P1.0s give it a try. They render an expansive soundstage populated with securely located instruments. It’s nicely layered, giving a fine sense of depth.

Things are convincing tonally, with the speakers sounding unusually even across the board. The integration between the drive units is seamless, helping to give the impressive musical cohesion we hear.

These speakers don’t shy away from large-scale dynamics either, punching out crescendos with enthusiasm and composure. At the same time they have the finesse to keep things interesting during the more low-key movements of the piece.

Cap it all off with an impressive ability to resolve low-level detail and the ability to organise it in a wholly musical manner, and you have a pair of speakers that set sky-high standards for the price.

While the Precision P1.0s’ appearance split opinions among our review team, there is no such dissent when it come to performance. These are insightful and composed performers that work well across a wide range of musical genres. Give them a signal of appropriate quality and they won’t fail to impress.

Read all our Wilson Benesch reviews