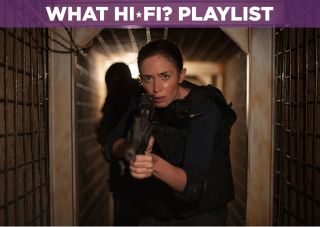 If there's a moment where you think you've got Sicario figured out, then that feeling probably won't last very long. Denis Villeneuve's latest film carries over a few traits from his previous film Prisoners – a sense of mystery and atmosphere – but avoids falling foul of the same cliches.

In Sicario, Villeneuve has crafted a thriller that pulls few punches, making for an absorbing, engaging experience.

MORE: Watch trailers for the biggest new films coming in 2016

One of the film's virtues is that it gives little away, allowing the viewer to soak up the details and attempt to figure the narrative out for themselves. Emily Blunt plays Kate Mercer, an FBI agent leading a kidnap response team. Ostensibly the film's lead, she subsequently finds herself out of her depth in dealing with the drug cartels.

Sicario begins with a raid on a cartel safehouse that turns into something else when her team discovers scores of dead bodies. This leads to Mercer being brought onto an inter-agency team headed by Josh Brolin's Matt Graves. He asks Kate for her help in apprehending those responsible or, as he says with a mischievious smile, "to dramatically overreact". Joining them is Benicio Del Toro's 'cartel specialist' Alejandro, a mysterious figure who, naturally, doesn't play by the rules.

Nothing is truly what it seems, with characters either bending the truth or obstructing Mercer from getting to the bottom of what's happening. The lack of answers the film initially provides isn't a fault, it only serves to draw you into the narrative.

It helps that Blunt, Brolin and Del Toro are on top form. Blunt pitches an idealistic character who's frustrated by being kept in the dark. Brolin has a lot of fun playing an expert in deflection, and in Del Toro's Alejandro, the film has its most intriguing character - one that simmers and then becomes more prominent as the end approaches.

Visually, Sicario has the look of something that's been left in the sun for too long. Sandy yellows and browns dominate with cinematographer Roger Deakins – a multiple Oscar nominee who has never taken home a gold statue – capturing the dusty, desolate, desert locations with great clarity and scope. One scene of the soldiers descending into a valley is wonderfully staged.

Sicario was shot on digitial cameras and the transfer to home video is an excellent one. Detail is excellent – you can almost count the white hairs in Del Toro's beard – with black levels especially good throughout. A thermal vision POV sequence near the end offers little detail but is a good showcase for a TV's black and white contrast.

Sicario is issued with a Dolby TrueHD 7.1 soundtrack that majors on gritty realism. There's a naturalistic vibe, whether it's the echoes of a voice during an interrogation or a thrilling sequence involving a convoy of US agents and Mexican police racing through Juarez. Bumps in the road, engine sounds and tyre squeals are reproduced with a convincing reality that makes you feel involved in the action.

Then there's Jóhann Jóhannsson's score which errs towards sound design. Its mix of string orchestration, percussion and pulsating bass (your subwoofer will love it) is typified by one of the film's standout tracks, The Border. This release by Lionsgate also has a Dolby Atmos soundtrack for those who want a more engrossing surround sound mix.

You wouldn't call Sicario a delight to watch, but that would be missing the point. Instead it's a taut, engrossing crime drama that keeps its audience on its toes.

It's a top-notch release with an excellent transfer and high-quality soundtrack (your sub will get a work out). At two hours long, Sicario doesn't outstay its welcome, with its final few scenes sticking in the memory once the credits roll.

Buy Sicario on Blu-ray at Amazon