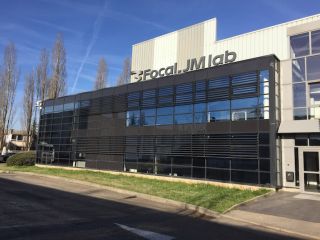 There's a certain irony in the fact that we visit French speaker company Focal on the day the British Government triggers Article 50, marking the start of the UK’s departure from the EU.

Focal, a great French hi-fi company, joined forces with a great British one, Naim Audio, in 2011 and the merger seems to have benefited both companies greatly. The Anglo-French alliance caused quite a stir at the time, with industry observers wondering who was taking over whom, but both brands have succeeded since in maintaining their own identities and independent product ranges.

In many ways, it's a natural synergy: Focal is a highly successful speaker manufacturer - often described as the ‘French B&W’ - while Naim specialises in electronics and has a legion of loyal customers. Naim, based in Salisbury, grew significantly under the leadership of former manager director Paul Stephenson, who took over after the death of company founder Julian Vereker in 2000. The business is now run by Stephenson’s successor, Dr Trevor Wilson.

The investment for Focal and Naim’s growth has come from French investment company Naxicap Partners (a majority stakeholder), private equity firm Aquasourca and the management teams of both Focal and Naim. The combined group is known as Vervent Audio Group.

Today Focal operates from a large site in Saint-Etienne, about an hour’s drive from Lyon, where it makes all its own drive units and many of its headphones, as well as housing its R&D centre.

Six years on from the merger, we hop over the Channel to catch up with the Focal team and find out what the company is up to. It is best known for its flagship Grande Utopia speakers, which have been causing a stir at hi-fi shows around the world for some years. They're 6ft high, weigh in at 260kg each and cost around £150,000 a pair.

One of the most impressive parts of the site is Focal’s bespoke demo room, which features a pair of Grande Utopias hooked up to the Naim Statement amplifier and Naim electronics. All in, the complete system is worth €500,000 (£425,000).

A quick listen to Lou Reed’s Take a Walk on the Wild Side, The Doors’ Riders on the Storm and Berlioz’s Symphonie Fantastique is one of the highlights of the trip. There aren’t many rooms that will accommodate a system of that size and power, but if you have the space, it’s mighty impressive.

Manufacturing of the Utopias, and other speakers in the Focal range including the Sopra, Electra and Aria models, takes place in the building next door. Focal is rightly proud of the fact that most of its products are made in France (apart from the entry-level Chorus range).

A tour of the factory proves the point: the people we meet on the assembly lines are obviously proud of the work they do, and enjoy talking about the products they're building.

Focal’s Beryllium tweeters, which are something of a hallmark, and the aluminium/magnesium ones are manufactured on the first floor of the building, while its proprietary ‘W’ composite sandwich Flax mid/bass cones are produced on the ground floor.

To give you an idea of the scale of the operation, the Ariane production line can produce 350 cones a day, and the PMMC line 700 cones on a single shift (or 1400 on a double shift).

Speaker cabinets are made in a separate facility two hours away in Bourbon Lancy, and shipped to Saint-Etienne for final assembly. We saw Maestro Utopias, the Diablo Utopia and Aria 948s on the production line.

But the main purpose of our visit is to see the new headphone manufacturing facility. Focal is a relative newcomer to the headphone market, its first model being the Spirit One that we tested back in 2012.

More recently we’ve heard the more affordable Focal Listen (£150), and its new flagship headphone the Focal Utopia (£3250), which we've just reviewed and consider to be a very fine pair of headphones indeed.

It’s the latter that has been making headlines. At its unveiling at CES in Las Vegas last January, the extraordinary Focal Utopia by Tournaire was claimed to be the world’s most expensive pair of headphones, at an eye-watering price of $120,000 (£95,000).

While the engineering is the same on both the standard Utopias and the Tournaires, it’s on the outside that you’ll notice the difference. Focal has teamed up with father and son team Philippe and Mathieu Tournaire, who run the master jewellers Maison Tournaire, to create the ‘ultimate headphone’.

Each earcup is covered in 18 carat gold, with three diamonds mounted on each side of the headband. The design is based on the mark of the Trilogy, the symbol of the Tournaire jewellers, which represents the three stages of life: past, present and future.

But it’s not just about designer bling: a portion of the profits from the sales of the Utopia Tournaire headphones will go to the P’tit Louis association, dedicated to saving eight-year-old Louis Biscini who suffers from a rare degenerative disease, spinal muscular atrophy type 1.

While few will be able to afford them, the Tournaires certainly make a statement. And the standard Focal Utopias are among the best headphones we have heard, which bodes well for the rest of the range.

But it's the rest of the line-up that will provide the majority of sales. This is an incredibly competitive market, with the likes of Bose and Sennheiser dominating.

Focal admits that it is not yet a big name in headphones, at least not outside France, but the company has expanded the range to six models, including the much more affordable Listen (£150) and Sphear (£100).

“Initially it was tough for us to break into the headphone market,” admits Romain Vet, Focal’s New Media product manager. “At the beginning we only had two models, unlike our competitors who had many more. But we sold 50,000 Spirit Ones, which was a huge number for us.

“Now we want to expand the range for a broader range of customers. We want to improve the sound of smartphones, to educate people who mainly listen to music on a phone, using MP3s or Spotify.”

With most of its headphone range made in France, Focal has invested heavily in a bespoke new headphone manufacturing facility in Saint-Etienne, capable of producing up to 80 pairs of headphones a day. During our visit we see Focal Utopia headphones being hand assembled and shipped out to markets all over the world.

“We had this crazy idea of developing a full-range, open-backed headphone,” says Clément Auzou, acoustic system designer. “With open-back designs you have to control the sound leakage. We tried dozens of different materials. The biggest challenge was the drive unit construction: you want the best low frequencies and the best treble, but sometimes those two things conflict. Developing a full-range headphone was tough.”

The Utopias, like all Focal’s headphones, also had to be tuned to be “consistent with the Focal sound”. In the end, Focal used a 40mm Beryllium driver for the Utopias with the “smallest and lightest voice coil ever made”.

Other models use an aluminium/magnesium dome (Elear) or a mylar/titanium one (Spirit, Listen and Sphear).

However, there’s more to Focal than just speakers and headphones. Around 30 per cent of its turnover comes from the in-car audio market.

Focal began by supplying aftermarket systems in 1989, and now works directly with manufacturers including PSA (Peugeot/Citroen/DS) and Alpine to create bespoke in-car systems. It has created optional Focal audio systems for the Peugeot 3008 (currently Car of the Year), the forthcoming DS7 Crossback and the Alpine A110 unveiled at the recent Geneva Motor Show.

The Peugeot 3008 system was four years in development,” says Focal’s brand and communication director Sébastien Dumas. “We wanted to change the experience of listening to music in the car. That project was a ground-up rethink: we asked Peugeot to reinforce the doors and move the placement of the drivers in the car to get the best audio quality.”

That’s not all: perhaps one of the most impressive projects Focal has recently undertaken is with Airbus, for whom it has created a dedicated audio and video system for its new corporate jet, the ACJ320 Neo. It includes a dedicated home cinema space within the plane, as well as audio throughout the rest of the cabin. Now that’s something we would definitely like to test!

Focal appears to be on a roll right now. Its expansion in the headphone and automotive market, the tie-up with Naim and strong growth in export markets such as the US and China bode well for the future.