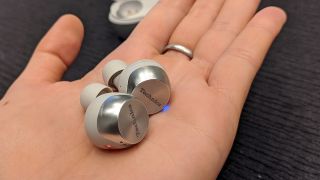 Let's get something out of the way: 2020 is not the year Panasonic joins its TV adversaries in launching an 8K TV. It hasn't gone for wow factor headlines with super-size, zero-bezel or conceptual displays either (even if it did flaunt its sensational side by wheeling out Stormtroopers and a miniature fire truck in its press conference).

That's not to say the Japanese giant isn't innovating this year, though – far from it. Sticking to its practical, 'here and now' guns, Panasonic has used CES this week to launch a brand-new flagship OLED TV that's set to be among one of the best-featured 2020 models on the market – and, if its predecessor is anything to go by, one of the very best performing too. And it's entering an all-new, hot-topic market for itself and its audio Technics brand: true wireless headphones.

Panasonic claims its flagship GZ2000 OLED TV for 2020 is capable of a higher peak brightness than the average OLED TV panel. Having changed the material that releases heat from the panel and tweaked the circuitry, Panasonic says the GZ2000 can consequently deliver 20 per cent more brightness than its excellent predecessor – although it won't put a more specific figure on it than "over 1000 nits".

While we naturally have to take TV brand-controlled demos with a pinch of salt, the GZ2000 did display a higher dynamic range – brighter highlights and deeper darks – next to the 'Competitor' OLED TV it was demoed next to.

Brightness was at the heart of two other GZ2000 features too...

Dolby's latest HDR trickery has undoubtedly been one of the most interestingly TV technologies announced at CES – and Panasonic is all aboard. Dolby Vision IQ is designed to optimise a TV's playback of Dolby Vision content according to the brightness conditions around a TV, therefore ensuring it never looks too dark in well-lit rooms.

It isn't a new HDR format or anything (thankfully) – the TV simply reads the Dolby Vision material's metadata while its sensor measures the brightness of the room to calculate the adjustments. But you will need a sensor-toting TV that supports it, such as Panasonic's 2020 HZ2000 OLED TV, to benefit.

Filmmaker Mode – a TV picture mode that promises to show compatible content as the director intended – has picked up momentum at CES, with Philips and Samsung announcing support for it alongside existing TV manufacturer backing from LG, Panasonic and Vizio.

Panasonic has announced that its flagship GZ2000 4K OLED TV not only supports the mode but enhances it through its own “Intelligent Sensing” technology, which, similar to Dolby Vision IQ, works to dynamically adjust the picture based on the ambient lighting around the TV when viewers are watching HDR10+, HDR10, HLG or SDR content (basically, anything but Dolby Vision material). Panasonic's demo of it leaves us satisfied, the darker areas and highlights of the picture measurably lifted when the room's lights are turned on.

While at CES 2019 Technics' announcements centred around its SL-1210 MK7 turntable, this year it's all about headphones; the brand's first true wireless headphones, in fact.

Priced £239, the EAH-AZ70Ws take aim at the class-leading likes of the premium end of the market, such as the Sony WF-1000XM3s, arriving with a fruitful feature set – adjustable noise-cancellation via a companion app, an 18-hour battery life, independent left/right-channel connectivity, Ambient Mode and IPX4-equivalent water resistance. Of course, Technics is promising best-in-class sound too.

Plus pairs from Panasonic

Interestingly, Panasonic is throwing a very similarly featured pair into the true wireless pot – but they're much more affordable. The £169 RZ-S500W largely mirror the Technics EAH-AZ70Ws' spec sheet, but their sound and consequentially noise-cancellation are supposedly inferior due to a smaller driver (8mm, not 10mm) and the absence of an acoustic chamber. Don't care for noise-cancelling? The RZ-S300Ws hit the even more attractive price of £109.