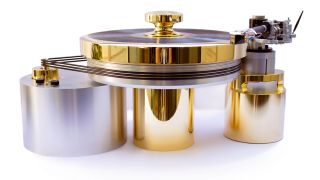 Plenty of turntables have passed through our test rooms over the decades, from brilliant budget record players that deliver excellent performance-per-pound value, to high-end turntables that have us eagerly revisiting every record in our collection.

But there's still a world of super-high-end turntables out there that we don't tend to see. After all, we tend to test products that the majority of us are more likely to buy.

The staggeringly-capable Kronos turntable is the priciest deck we've tested, but at £30,000 it's pocket change compared with some of the spinners out there.

Vanity projects? Very possibly. But who's to say some of the engineering feats here won't cause technology to trickle down to more affordable decks, improving things for all of us? That's what the £30,000 Rega Naiad deck did for the third-of-the-cost Rega Planar 10, after all.

Whether the stuff of dreams or a shining example of audiophile excess, here are some of the most expensive record players ever made...

Air by name, air by nature. How many decks do you know with an air bearing to support the platter, or achieve isolation from its support through air suspension? But it doesn't stop there. Those with warped discs - that's us too - can rejoice in the TechDAS's ability to suck a record flat onto its platter, giving the cartridge an easier ride.

The Statement v2 is made from bullet-proof wood sandwiched between aluminium plates and can accommodate up to four tonearms, including the £18,500 Statement TT1 v2 tangential tonearm (should you have some cash left over). Unlike the TechDAS there's no air main bearing, with Clearaudio choosing to float the platter with magnetism instead.

If this is a tad out of your budget, more realistic (and, at their own price, excellent) Clearaudio turntables are also available.

The culmination of J.C. Verdier's 30 years of research into turntable design and engineering, the La Platine is huge. It has a 50cm platter (that’s a 12-inch record in the picture) and weighs a colossal 400kg thanks to a base made of granite. Indeed, "its originality lies in the systematic use of very largely oversized pieces," according to J.C. Verdier. And, say what you like about the design, it certainly looks better than the company's website.

MOTT stands for Mother of TurnTable and this is one serious mother, with an overall weight of 325kg. There are various specifications available for this German turntable but the top-end model comes with automatic pneumatic adjustment and an air bearing. You'll have to wait six months for one to be made to order, mind.

The One Degree was designed by NASA space engineer Aleks Bakman and claims to eliminate all resonance thanks to liquid suspension. Naturally, it uses "aerospace grade metals" too. It features 24-carat gold plating and weighs a rather more manageable 23kg. We'll happily doff our cap to this one.

Billed as a "tribute to the science and art of vinyl music reproduction" and named as such, this Basis Audio turntable uses a vacuum system to hold the record down on the platter. It even claims to be able to restore warped records to "exact flatness". There's a non-vacuum version, too, but in for a penny in for a pound, we reckon.

Transrotor is confident your £105,000 will be well spent on the Artus, thanks to the deck's ability to deliver a completely level playing platform using 'cardanic suspension' - a gimbal design ensures it pivots around a single axis. Made from solid aluminium and acrylic, it also features a contact-less magnetic field drive and a balanced tone arm (you'd hope so, too). And it weighs a quarter of a tonne.

This battery-powered (yes, you read that correctly) turntable is apparently made from "one entire tree". And not just any tree - one that’s been dried for at least 20 years. Craftsmen then spend two weeks getting the surface “just right” by hand. It uses a two-chassis construction designed “to avoid any standing waves” and can support two tonearms. You can even have the platter in Ferrari red.

The Reference II was limited to just 25 models (maybe check eBay...), has a platter that weighs 20kg, and some 15kg of brass-shielding for the motor. There's no end to the fantastical-sounding features - "liquid nitrogen-rectified belt" - but sadly the £165,000 doesn't go quite as far as you might hope. You’ll still need to shell out for a tonearm and cartridge.

We think the Derenville VPM 2010-1 might just be the most expensive turntable ever made. You’d expect a great deal of technology in something costing the best part of half a million pounds, and you’d be right.

The VPM 2010-1 has two frequency controlled motors on the belt, a solid 60kg Corian chassis standing on four air suspension feet, laser toe angle measurement and an integrated digital scale. There's an HD camera and a screen for checking everything is running smoothly, plus a touchscreen remote control. Don't all rush at once...