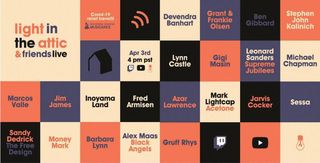 (Image credit: Light in the Attic)

For every cloud, a silver lining. The coronavirus pandemic is cancelling gigs, concerts, musicals, theatrical performances and club nights around the world, and forcing people to 'stay home' during lockdown or self-isolation, which has meant artists have had to get extra creative when it comes to finding an audience.

Below you'll find our round-up of some of the best live streams we've spotted, from regular performances, to one-off concerts. And, thanks to the wonders of live streams on YouTube, Facebook, Twitch and Instagram, many of the shows will be available to watch long after the live version.

Light in the Attic

Now here's an impressive line-up. Light In The Attic & Friends at Home will feature performances from legendary artists whose music LITA has re-released over the past 20 years, along with a few special guests covering songs from the label's catalogue. It's a free concert but 100% of any donations will go towards MusiCares’ COVID-19 Relief Fund, assisting those in the music community affected by the Coronavirus pandemic. Performers will include Barbara Lynn, Fred Armisen, Michael Chapman, Jarvis Cocker, Money Mark, Gruff Rhys and many more.

View via the Light in the Attic Twitch channel

View via the Light in the Attic YouTube channel

Virtual Sounds, which takes place this weekend, claims to be the first online classical and jazz music festival. It's aiming to raise money for musicians whose work has ground to an abrupt halt due to the coronavirus pandemic. For £10 ($12) per household, Virtual Sounds will deliver classical and contemporary performances, workshops, masterclasses and interactive talks to a screen in your home. Performances begin at 7pm (BST) and run until late on Saturday 4th and Sunday 5th April, with artists performing including AyseDeniz.

View the Virtual Sounds website for full details and tickets

Free West End and Broadway musicals? Sounds good to us. Andrew Lloyd Webber will be streaming his musicals for free online in a new series entitled "The Shows Must Go On". The series will start with the 2000 adaptation of Joseph and the Amazing Technicolor Dreamcoat starring Donny Osmond, Maria Friedman, Richard Attenborough and Joan Collins. The show will be available for 48 hours from Friday 3rd April at 7pm (BST). And it's Jesus Christ Superstar with Tim Minchin next week...

Global Citizen is a "movement of engaged citizens who are using their collective voice to end extreme poverty by 2030". Together At Home is Global Citizen's virtual concert series in partnership with the World Health Organisation. Streaming live from the company's YouTube channel, the series has already hosted Chris Martin of Coldplay, Common, John Legend and more.

One of the original names in live streaming is well-prepared for entertaining in isolation and has been quick to pull together a Streaming from Isolation series of broadcasts. Look out for regular live shows and classic sets from previous years. Your virtual club night, then.

It may not be music but it is a special treat we think is worth sharing. The National Theatre has announced #NationalTheatreAtHome, which will see some of the best British theatre delivered at 7pm (BST) every Thursday on YouTube. It began with James Corden in One Man Two Guvnors on 2nd April, which you can still watch back, and we have Jane Eyre to look forward to on Thursday 9th April.

In a similar vein, Sadler's Wells is offering full-length dance performances and workshops online. The programme began on Friday 27th March with an exclusive online screening of Deluxe by BalletBoyz and it's followed on Friday 3rd at 3pm (BST) by Rumpelstiltskin. You will be able to watch performances back for seven days via the company's Facebook page.

While we're talking about music industry mega stars, we should mention Bruce Springsteen, who while he hasn't yet - we haven't seen - performed an impromptu concert, has released for the first time his live performance from Hyde Park. The London Calling concert is available to stream via Apple Music and YouTube.

One of the biggest record labels in dance music is hosting virtual festivals of live DJ streams – and dancers! – to keep us entertained. Expect big-name DJs and the chance to watch back at your leisure on Facebook. We've had rounds 1 and 2, and Virtual Festival 3.0 is scheduled for Friday 10th April, starting at 1pm (BST).