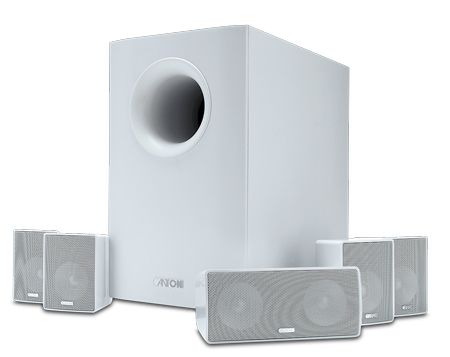 Likeable, listenable, but ultimately off the pace both literally and by the standards of the market

The Canton Movie 130 5.1-channel speaker system replaces one of our favourite little speaker packages of last year, the Canton Movie 125 MX, despite several five-star appearances in various 2011 editions of this magazine.

Clearly 'If it ain’t broke, don’t fix it' doesn't hold much sway with the German manufacturer, but to be fair the replacement system uses the same satellite speakers as the outgoing package.

However, the cabinets are smoothed and tapered to appeal to as broad a lifestyle-conscious constituency as possible, and there's been some minor crossover tweakage.

Changes to the subwoofer are more extensive, however: it’s a bigger cabinet, for starters, with 30% more internal volume than the previous model. Amplifier power is down from 140 watts to 120W, and the cabinet is now front-ported.

The premium for this mild rethink is an extra £50 at the checkout, which brings the Canton pretty much head-to-head with Tannoy’s HTS-101, last year’s budget-conscious style package of choice.

The overall sonic signature of the Movie 130 isn’t far removed from that of the Movie 125 MX, but where it differs quite significantly is in attitude.

Canton Movie 130: Sound quality
The Movie 130 is a rather self-consciously grown-up and considered listen, and if it’s partnered thoughtlessly, it can sound rather pedestrian.

There’s no doubting the coherence or cohesion of the soundstage it generates, nor the detail levels it extracts, but compared with the outgoing system there’s a noticeable shortage of drive.

Most (all right, all) of the blame for this can be levelled at the subwoofer, which plods when it should kick.

There’s a lack of urgency to soundtracks for which the Movie 130 only partially compensates with its outstanding midrange fidelity and confident effects placement.

VerdictSo while there’s a lot to admire about the Movie 130, we’re a little bit disappointed. Sometimes it really is best leaving well enough alone. Not quite a 'verschlimmbesserung', but not a radical upgrade.