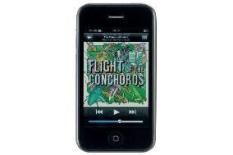 The second generation iPhone includes 3G technology for faster web browsing, and sports a thinner chassis and new plastic back panel (black on the 8GB version, black or white on the 16GB).

And the recessed headphone jack has gone, so you can use your own 'phones.

Somewhat disappointingly for a phone of this stature, you get only a 2MP camera (some of the other phones boast 5MP). Also, Apple hasn't seen fit to include an MMS messaging function.

The 3.5in screen is a fingerprint magnet, but it's a small price to pay for the phone's slick menu system
and gorgeous multitouch interface.

It really is the finest interface on the planet, giving you access to all of the phone's functions with just a press or sweep of a finger.

Of course, the iPhone uses Apple's slick iTunes software to help you manage music and video files and you can always buy TV programmes and films direct from the iTunes online store.

You also have access to Apple's App store through the phone, where you can download third-party applications to extend the phone's functionality.

For example, Sonos has launched its own app that allows you to control the Sonos streaming system through the iPhone.

Like Apple's stand alone iPods, the iPhone is a very accomplished music player. Replace the tinny,
supplied headphones and revel in its dynamic, entertaining and punchy sound.

The Kooks Always Where I Need To Be bounds along at great speed: the phone defines instruments and vocals extremely well.

Video playback is superb too. Blacks are, well, blacker on the BlackBerry, but the Apple shows greater detail in dark scenes. During a trailer for Quantum Of Solace you can see the edges of the lapel on Bond's suit and more of the texture.

The iPhone also produces a subtle picture with a natural colour palette. Even streaming content through BBC's iPlayer, the iPhone did a great job.

When the iPhone was launched, some people dubbed it the “Jesus phone” and it's not difficult to see why there are millions of disciples worldwide. It's a truly magical device.