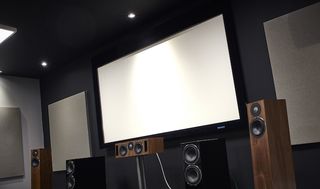 Why buy a projector screen? It’s a question we’re asked often. Many people mistakenly believe that a simple painted white wall or a plain white bed sheet will do the job as well. While you will see a picture of sorts with either of these options it will be one where detail, contrast and colour fidelity are heavily compromised.

Conventional paint on a wall isn’t designed to reflect light in an even way and, no matter how smooth the plaster on the surface, the light will be scattered. A sheet is just as bad, adding a lack of flatness to that sorry list of failings. There’s no two ways about it, if you want a genuine cinema experience you’ll need a proper projector screen, and that goes for when you use an outdoor projector too!

Don’t worry, they don’t have to be massively expensive. Decent options start from below £100 with premium offerings just over the grand mark. While we’re not talking about insignificant sums of money, in the context of a typical projector home cinema system, those outlays are reasonable.

The first thing you need to decide is how big you want the screen to be. This depends on how much space you have, but typical sizes tend to be between 96 – 120 inches (measured diagonally). Domestic TV screens may be getting bigger all the time but they don’t compare to the scale of the image you’ll get here.

While it’s tempting to get the biggest screen that will fit in the available space, just make sure that it’s possible to see the bottom edge of the screen from every seating position. Also, don’t go for a size so large that you have to move your eyes to see the whole of the screen. It’s an uncomfortable feeling akin to sitting in the first row of seats in a cinema.

So, if you have a screen that is 2.6m wide and a projector with a throw ratio of 1.3 you'll need to put the projector 3.38m away from the screen.

As well as the size of screen, consider the type. Do you want a fixed model that sits on your wall or a roll-up option that can be hidden away after use? The answer depends on whether the room is a multi-use space. If so, hiding the screen away makes a lot of sense. In a dedicated home cinema room the fixed option is the way to go, because the screen is always ready for viewing and adequately tensioned to ensure a smooth, flat surface for the projector’s image. It also doesn’t need power to operate any motors.

While the fashion with TVs dictates that a minimal border is ideal, we advise against carrying that through to projector screens. It’s best to get a fixed screen with a relatively wide frame. The frame should be covered with black light absorbing material, so that any part of the projector image that falls on it isn’t reflected. This means that millimetre perfect alignment of the projector’s image isn’t required and also that your picture is perfectly framed, helping it standout.

How much gain do I need?

There are other things to consider about projector screens. While most options will be white, you’ll also find grey and even black variants. These darker choices are intended for use in more brightly–lit rooms.

Another factor is screen gain. Look at the specifications of any screen and there will be a gain figure. A gain of 1.0 means that the screen reflects all the light that shines on it, while higher numbers means that the image on the screen is brighter when viewed from straight ahead but its image suffers when looked at from wider viewing angles.

Higher gain screens make sense in brighter rooms but can also suffer problems with ‘hot spotting’ where the middle of the screen will appear brighter than the edges or suffers from glare. If you have a projector that doesn’t render blacks very well or a darker room, it’s well worth considering a screen with a gain below 1.0. This will help to make things darker and optimize the results you get. If your projector has enough light output, the loss of reflected light my not be an issue, so the gains will be worth it.

If your screen is placed in front of your centre speaker make sure it is made of perforated material. The holes let the acoustic output from the speaker pass through the screen more easily, so keeping soundtracks sounding good.

Lastly, the best projectors have a limited light output and are intended for use in darkened rooms. Try to keep your room as dark as possible to maximise the contrast and colour integrity of the image you see.