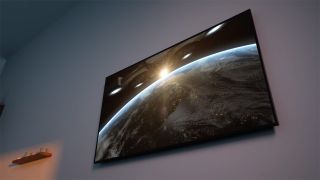 Dolby Vision IQ aims to solve a problem with which we're probably all familiar. How many times have you watched a TV drama and found it was too dark for you to make out all the details? The Game of Thrones finale was marred for many by being too gloomy for viewers to see what was going on, while Netflix's Ozark has also come under fire for leaving far too much to the imagination. And they're not alone.

So why is so much new TV so dark? In part, because filmmakers are making the most of the expanded contrast that HDR (High Dynamic Range) allows, grading content with the dark depth they see fit. Unfortunately, this can in turn pose a problem for viewers watching in well-lit rooms that make dark details harder to see. Simply turning up the screen's brightness may appear to improve things but in reality you condense the contrast and lose dark depth – even on the latest OLED TVs.

Dolby Vision IQ is a new technology that aims to address this issue for Dolby Vision HDR content.

What is Dolby Vision IQ?

"Beyond HDR" is how we heard Dolby Vision IQ being described when the technology was launched at CES 2020.

The new Dolby technology is essentially an updated version of Dolby Vision, one of a number of HDR formats alongside HDR10, HDR10+ and HLG (Hybrid Log Gamma).  It's designed to optimise Dolby Vision content on your TV according to the brightness of the room. This should mean that Dolby Vision content, regardless of its overall brightness, is just as intelligible when watched in a bright room as in a dark room.

To do this, Dolby Vision IQ uses the dynamic metadata from Dolby Vision, as well as light sensors inside your TV, to dynamically adjust the HDR picture based on the content and ambient light conditions in your room.

If you switch from bright live sport to a darker TV show, the TV will adjust accordingly for the optimum picture. The promise: to deliver "a perfect picture in your room at every moment".

This is a new technology that isn't backwards compatible, so to benefit from Dolby Vision IQ you'll need a TV that specifically supports it. And of course, these compatible TVs will also support Dolby Vision.

So far, LG and Panasonic have announced that their 2020 TVs will be compatible – not surprising considering they were both Dolby Vision early-adopters back in 2014.

The new Dolby Vision IQ TVs include Panasonic's flagship OLED TV for 2020, the HZ2000. We should know what other models from the company will support it when it announces the rest of its 2020 TV line-up next month.

Sony and Philips have historically backed Dolby Vision in its TVs, but neither has yet confirmed support for Dolby Vision IQ. In fact, at Philips's 2020 TV launch event, the company's Danny Tack suggested that while Dolby Vision IQ was on the radar, it was unlikely to make an appearance on any Philips sets this year.

Samsung isn't likely to support the technology anytime soon, with its TVs continuing to back its own HDR10+ format as opposed to Dolby's HDR rival.

On the subject of manufacturers doing their own thing, Panasonic is additionally striving for room brightness democracy by applying TV light sensor trickery to the UHD Alliance’s new Filmmaker Mode. This is a picture mode that overrides the TV's processing, such as motion smoothing and detail enhancement, and promises to deliver the cinematic experience exactly as it was intended by the director. Panasonic is calling this 'Intelligent Sensing'. Unlike Dolby Vision IQ, this Panasonic mode will work with SDR and non-Dolby Vision HDR content, adjusting the luminance level of the picture based on the ambient lighting detected around the TV.

Now, a TV's light sensor being used to affect picture performance is nothing new. For years TV manufacturers have been using this technique to produce optional 'eco' (or similar) modes that work to adjust picture performance according to room conditions. And, in truth, we often recommend turning it off, finding that it detrimentally affects picture quality.

So it will be interesting to see how well this method is applied in Dolby Vision IQ, bearing in mind the TV will also be receiving Dolby Vision content metadata to help determine how the picture is adjusted in real time.

So far we've only had a sneak peak at the technology at work: in a Panasonic demo at CES. In a demo room with the lights turned on, Panasonic played a darkly-lit scene on a Dolby Vision-graded 4K Blu-ray of Us, both on its Dolby Vision IQ-supporting HZ2000 and last year's non-Vision-IQ-supporting GZ2000.

The result? It did look better on the HZ2000. The woods, the car parked within them, and Lupita Nyong'o’s clothing were indeed clearer – like they’d been given a slight lift – but dark depth remained, unlike if the brightness had just been turned up.

Still, we'll reserve proper judgement on Dolby Vision IQ until we go twelve rounds with it on a few more 2020 TVs, which should be in the not too distant future. The end to gloomy scenes ruining the action? Let's hope so.

5 key highlights from Panasonic and Technics at CES 2020

5 key highlights from Samsung at CES 2020