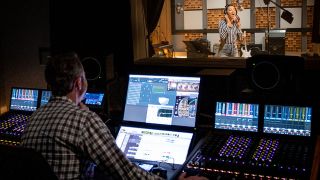 Dolby Atmos Music is looking to add a whole new dimension to the music listening experience. Dolby has partnered with Universal to remix thousands of tracks from big-name artists using the new Dolby Atmos Music technology in an effort to prove Atmos isn't just for home cinema viewing.

Dolby's object-based sound tech may have been designed for surround sound in cinemas and later homes, but it has since expanded into tablets and smartphones – and now it's getting into music; music that is mainstream and available on the growing number of Atmos-capable devices.

Read on for everything you need to know...

What is Dolby Atmos Music?

Put simply, it's a way of remixing songs using the Dolby Atmos technology.

Atmos is an object-based surround sound tech that started life in cinemas but has since made its way into home cinema set-ups all over the world. It differs from standard 5.1 and 7.1 channel set-ups by adding in extra channels overhead (for example, with speakers mounted in the ceiling). The result? A much more engrossing sound, creating a dome of audio with the audience at the centre.

It's much more precise than standard surround sound. Thanks to the new calibration, sound engineers can precisely place sounds at various points in the soundstage, rather than just pumping them through a select audio channel. It makes for a much more realistic and immersive home cinema experience.

And now it can do the same for music.

What music is being released in Dolby Atmos Music?

But despite only around 50 tracks having been remixed using the tech so far, we can expect that number to rise significantly in the near future. Dolby recently teamed up with Universal Music Group (UMG) to release thousand of "new songs, current hits and legendary tracks" in Dolby Atmos, spanning a wide range of artists and genres. Dolby hasn't said exactly which tracks are being released in Atmos Music, but we can apparently expect works from Bastille, The Beatles, Billie Eilish, Elton John, Lady Gaga, Luciano Pavarotti, Marvin Gaye, and The Weeknd.

As well as remixing existing songs, new songs will be produced using Dolby Atmos. These will span "hip-hop, pop and rock through jazz and classical music", according to Dolby.

Dolby has posted a series of YouTube videos of producers talking about working with the technology. Above you can see the one featuring Deadmau5. Others include Metrik, Kerri Chandler, Hospital Records, Solarstone and Yousef.

The recently announced Amazon Music HD music streaming service plan will be a serious outlet for Dolby Music, expected to give subscribers access to a growing library of Atmos-mixed music.

What devices does Dolby Atmos Music work on?

Dolby Atmos Music tracks should work on any device that can handle Dolby Atmos. This includes home cinema systems, laptops, and even tablets and smartphones. Of course, you're going to get a much more impactful listen from a home cinema set-up over a smartphone. But if you're on the go, you should definitely notice the difference from an Atmos-ready smartphone.

Headline news is that the just-announced Amazon Echo Studio smart speaker alongside Amazon Music HD is powered by Dolby Atmos too, making them the first smart speaker and streaming service capable of delivering the "immersive music experience".

So which other devices can handle Dolby Atmos?

As already mentioned, the iPhone 11, 11 Pro and 11 Pro Max all have Dolby Atmos. Other mobile devices include the OnePlus 7 Pro, Nokia 6, Samsung Galaxy S10, Sony Xperia 1 and Amazon Fire HDX 8.9.

On the home cinema front, most of the AV receivers released in the last couple of years are compatible with Atmos, including those at the budget end of the market. Pioneer was the first to launch an Atmos speaker package, followed by Klipsch, Focal, Jamo and Damson's S-Series wireless system.

Atmos-enabled speaker modules are also available - when placed on top of your existing speakers, they deliver Atmos sound from a compatible receiver.

Examples include KEF's Q50a and R8a, while there are also models from Elipson, Tangent and Eltax.

If you don't want a full surround sound system, you could instead opt for a Dolby Atmos soundbar, such as the Sony HT-ST5000 or Sennheiser Ambeo.

Most high-end TVs nowadays are Atmos-compatible. Though beware that you won't get quite the same effect as from a speaker package.

And as for Blu-ray players, Dolby says as long as yours conforms to the latest specifications and can output a bitstream audio signal for your AV receiver to decode, it should play Atmos Music no problem.

MORE: Behind the scenes with Dolby Atmos at Ministry of Sound