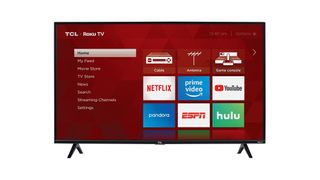 One of the easiest 21st-century recommendations to give anyone whose TV has a dire streaming offering is to either a) get an all-new TV), or b) invest in a budget, plug-in video streamer. One guess as to which elicits the more favourable response...

Alongside Apple, Amazon and Google, Roku is one of the most popular TV streamer brands in the US, with its Roku Streaming Stick Plus and Roku Express players offering users access to over 500,000 movies and TV episodes across the likes of Netflix, Amazon, Hulu, HBO, CBS and Sling TV.

Well, nowadays you don't need to purchase or plug-in a Roku streamer, as the smart TV OS platform is directly integrated into a handful of 4K TVs. All of its smarts and apps are already right there, inside the TV, all at the touch of a button.

Roku has partnered with the likes of TCL, Sharp and Hisense to bring Stateside consumers Roku 4K TVs and HD TVs. At the start of 2017, Roku TVs had 13 per cent of the US TV market share - and we wouldn't be surprised if today that figure was higher.

Naturally, then, there are plenty of Roku TVs at Walmart, Amazon and Best Buy to choose from, from as little as $150 to more than $500. But what is Roku's TV OS like, are the Roku TVs any good, and what are the best deals? The answer is just a few minutes' read away...

Roku hasn't been able to rub shoulders with powerhouses like Amazon and Google, and become the success it is today, with just mediocre software. Indeed the Roku streaming platform is among the best.

The platform offers access to several subscription services, including but not limited to - deep breath - Amazon Video, Netflix, Hulu, Showtime, Sling TV, HBO Go/Now, Starz, PlayStation Vue, CBS All Access and WatchESPN. But bear in mind you'll need to subscribe to each service you want to watch content from, as, for the uninitiated, Roku – like Amazon Fire and Apple TV – is simply a single-access gateway to all these services.

Roku does offer apps with free content, though, such as YouTube, Crackle, PBS Kids and its own The Roku Channel. There is also access to buy and rental services like FandangoNOW, Vudu and Google Play, too.

As we said in our latest Roku streamer review, its interface is a "simple, clean, clear" affair with "only a handful of menu options, the homescreen largely being dedicated to a grid of your chosen apps.

"It’s a more objective approach to Amazon’s Fire TV, which pushes its own content throughout its interface. As the Roku is a neutral party, you’ll get the same experience whichever streaming apps you subscribe to.

"Menu options are kept brief, so alongside the standard search and settings options, there is also a ‘Channel Store’ and an option for ‘My Feed’. The [Roku] Channel Store is the place to go for more apps, with thousands to choose from."

With it directly embedded into a TV experience, you have immediate access to all Roku has to offer. The interface on each brand of Roku TV may differ slightly - usually just with a different colourway - but all the content will be present and correct.

If you've got this far, you're likely sold. So which Roku TV is for you?

TCL has the most exhaustive selection of Roku TVs on the market, ranging from $150 32in HD models to 4K TVs that are over twice that size and five times that price.

The Chinese company, which in 2017 became the third-biggest brand in North America, is renowned for offering huge screens with vast smart features at dirt-cheap prices. We haven't tested any TCL TVs ourselves – the brand is in its infancy in the UK market – but we'd say they're more a safe bet than false economy going on specs, user reviews and brand reputation.

Every TCL 4K TV sports a 3640 x 2160 Ultra HD resolution and support for High Dynamic Range (HDR). Each will feature a few HDMI sockets (at least one of which will support 4K passthrough), one or more USB inputs, built-in wi-fi, and compatibility with Roku's mobile control app. They also come with an official Roku handheld remote, while support for Google Assistant and Amazon Alexa means that users can use their voice to control certain TV functions via a smart speaker.

As if often the case with such budget TV offerings, though, we'd be wary of recommending them to anyone whose priority is getting the best 4K HDR picture quality. That's what you typically pay extra for to get premium brands and premium sets in your living room, after all.

But for those looking for decent 4K and HD pictures and a vast selection of built-in smart apps whilst also looking after their wallet, these are the best deals and cheapest prices on 43in - 65in budget TCL Roku TVs out there...

We're more familiar with the Sharp brand. Its TVs used to be regulars in our test rooms, always leaving with either three- or four-star reviews for their enticing price tags, good features, and average or above-average picture quality. Now that the brand is back in Europe once more, we hope to re-familiarise ourselves soon.

Again, the company aims to get you a better inch-per-dollar ratio than the likes of Samsung, Sony, Panasonic and LG, with a large variety of screen sizes all at appealing price tags.

The Sharp Roku TVs are very similarly spec'd next to their TCL rivals, matching them for all the 4K and HDR support, voice control ability, connectivity and remote control features mentioned above.

Your choice between the two brands may well come down to screen size options (Sharp has 50in and 58in choices, but no 65in), brand loyalty or even where you like to shop. At the time of writing, Sharp's 4K Roku TVs are only widely available and well-priced at Best Buy...

In the last few years, Hisense has made its mark on the world not only as FIFA 2018 World Cup and Euro 2020 sponsors, but also as a purveyor of good-value, well-performing budget TVs.

We've seen a handful of competitively-priced Hisense 4K TVs of late, and the majority have suitably impressed with their performance-per-dollar offering. There's no reason to suspect the 43in - 65in Hisense with Roku TVs mentioned below are any different. It's true that due to our differing experience and review time with the three TV brands we can be most confident of the Hisense TVs' picture quality.

But it is worth noting that while they match their TCL and Sharp competition for 4K and HDR, HDMI and wi-fi connectivity and Roku remote offerings, they don't support Google or Amazon voice control. The TVs below do, however, come with Roku remotes that are compatible with TV voice search for finding specific titles.

Roku's smart platform is easy to recommend. It's a one-stop shopfront for every subscription service you'd likely sign up to, plus free content and a simple, intuitive interface only enhancing its appeal. Unless you're a die-hard Apple TV fan or a dedicated Amazon Prime user, why wouldn't you buy into it?

The Roku TVs with the streaming platform built-in are all from reputable brands (TCL, Sharp and Hisense) offering a wide range of TVs at attractive budget prices.

Their main purpose here really is to offer an all-encompassing streaming hub on a budget, rather than deliver the very best, industry-leading 4K HDR pictures. Also worth taking into account is that the availability of 4K HDR content from, say, Netflix and Amazon isn't likely through the built-in service.

Still, if budget prices and a whole host of HD streaming satisfy your requirements, you may well wish to welcome a Roku TV into your home with open arms - and which you opt for will largely be down to screen size, price and retailer preference.

If you've got this far but are leaning towards spending a bit more for a better picture performance and the promise of 4K streaming content, there's always the separate budget TV plus video streamer options, the best of which can be found here from under £400: