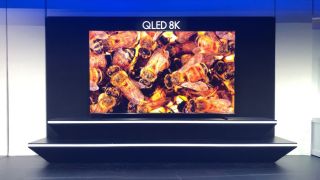 Believe it or not, 8K TV is already here. From 8K TVs to 8K broadcasts, there has already been a huge amount of work put in to making the resolution a reality for consumers.

But before we get ahead of ourselves, let's take stock. It's fair to say 4K TV has only in the last couple of years or so become mainstream. That doesn't mean we're all watching it, all the time – but it's now actually quite hard to buy a new TV that isn't 4K. And thanks to the likes of Amazon Prime Video, Netflix, 4K Blu-ray, BT and Sky, there is now a lot of 4K content to watch.

But, as ever in consumer electronics, there is always something new on the horizon. The prospect of 8K certainly shouldn't affect your eagerness to go 4K – but to be informed is to be empowered, so let's take a good look at the 8K landscape.

So, who's working on 8K TV? And when could we be watching it? And is it actually that much better than 4K? Read on.

What we're talking about here is resolution. This means the number of horizontal and vertical pixels. Pixels equal information, so more pixels should mean a better quality image. That's the theory, at least.

In the case of 8K, this means a horizontal resolution of 7680 pixels and a vertical resolution of 4320 pixels (7680 x 4320), resulting in a display that consists of just under 33 million pixels.

8K video developments to date have largely been driven by filmmakers and TV broadcasters. From a video-editing point of view, the higher resolution can be useful. While filmmakers may not ultimately deliver an 8K film, shooting in the higher resolution gives editors room to manoeuvre, allowing for cropping and zooming while still retaining a high-resolution image. That said, 6K cameras are currently far more prevalent in Hollywood.

Meanwhile in Japan, broadcasters have been experimenting with 8K TV for some time. Back in 2015 the Japanese Broadcasting Corporation, NHK, ran a series of 8K trials, and in 2016 the company announced it was successfully demoing 8K broadcasts. So successful were the trials, NHK has now launched the world's first 8K television channel. Since 1st December 2018, it has broadcast 8K TV shows on a daily basis, 12 hours a day, and even broadcast the 2019 Rugby World Cup in 8K. Next up is the 2020 Tokyo Olympics.

The Korean Broadcasting Corporation (KBS) is also researching 8K broadcasts, working with LG on content, possible broadcasts and displays – there was 8K experimentation at the 2018 PyeongChang Winter Olympics. And if you were in Brazil at the time, you could have watched the 2018 World Cup in 8K.

The likes of Netflix and YouTube were, of course, quick out of the blocks when it came to 4K content, and now streaming site Vimeo has jumped aboard with 8K. A recent update adds support for HDR and 8K resolution videos. Naturally, you will need an 8K screen to take advantage, and you might be hard-pushed to find anything truly worth watching.

Rakuten TV wants to become a true global alternative to Amazon Video and Netflix, and has ambitious plans to help that become a reality. Along with a rapid expansion into new countries, it seems 8K content is also part of the strategy - the company announced plans to have 8K films on its service by the end of 2019, although all has since gone rather quiet on that front.

What about 8K TVs?

So if we can see the fledgling shoots of 8K content, what about the compatible devices on which to play 8K it?

Trade shows such as CES and IFA are the perfect place for TV manufacturers to showcase their latest and often craziest new tech, so it's perhaps no surprise we've been seeing the odd 8K screen for a few years now.

LG and Samsung both showed off 8K TV prototypes at CES 2015, and Sharp went a step further by offering an 85in 8K TV for sale in Japan later that year.

Perhaps in search of some headlines, LG claimed the world's first production 8K TV in 2016.

The gloves came off at IFA 2018. With the likes of LG, Toshiba, TCL and Samsung all display working 8K screens. Samsung trumped its rivals by releasing its 8K TVs to the public very shortly afterwards - we reviewed the QE85Q900R and QE65Q900R from that very range.

As expected, CES 2019 introduced some competition from Samsung's rivals, and both LG and Sony have now launched their own 8K TVs - the OLED88Z9PLA and KD-85ZG9 respectively. Samsung, meanwhile, updated its 8K TVs for 2019, with the second-generation models being branded Q950R.

CES 2019 also saw the announcements of a number of other 8K models, such as the TCL X10 and a Huawei 8K TV with a 5G module, but these have so far failed to materialise in shops.

The impending CES 2020 show should bring with it a whole raft of new 8K TVs, and we'll update this page accordingly.

And other 8K products?

TVs are likely to be followed up with 8K projectors, Blu-ray players, games consoles and more.

The first non-TV 8K product we saw was Sharp's 8K soundbar, which was displayed on the brand's 8K-centric stand at IFA 2018. While we don't know much about the soundbar, we can only presume its HDMI ports are HDMI 2.1-certified enabling them to pass-through 8K content.

The soundbar was also billed as offering Dolby Atmos and supporting 22.2-channel surround sound. NHK (the Japanese broadcaster) is advocating 22.2-channel sound as the sonic standard to accompany its 8K 'Super Hi-Vision' video.

2020's big 8K launches will most likely be on the gaming front, though, with both the PlayStation 5 and Xbox Series X tipped to support 8K resolutions.

MORE: What is HDMI 2.1? Everything you need to know

When will we be watching 8K?

While we're always interested in the latest technology, and of course it pays to keep abreast of the latest developments, we don't think 8K TV should be something affecting most people's TV buying decision for now.

After all, unless you have access to both an 8K TV and NHK's 8K broadcasts (which is nobody outside Japan), it seems a bit pointless.

Naturally, Samsung argues that its 8K TVs' AI upscaling makes the most of 4K (and even Full HD and SD) content, but while we find it "very good indeed... miraculous when you consider how much of on-screen picture is being ‘made up’ by the TV", it doesn't really offer a step forward over the company's cheaper flagship 4K TV.

Then, as we learned from the early days of 4K, there are the rules and regulations that could see early adopters lose out with an early-wave 8K TV that doesn't support some future hardware necessity. The HDMI 2.1 spec, a necessity for connecting TVs to sources for 8K playback over HDMI, offers some comfort, but the existence of two competing 8K TV certification standards - one led by the Consumer Technology Association and the other by the 8K Association - is definitely a concern..

Also, adoption takes time. Even though 4K TV uptake has, by all accounts, happened faster than that of HD, it still remains the exception rather than the norm. Shop floors may be full of 4K screens, but the vast majority of content is viewed by consumers in HD at best – and even the BBC has only dipped its toe in the 4K water.

Thanks in part to the football World Cup, 2018 was seen as something of a breakthrough year for 4K broadcasts – but very little has actually happened on that front since. Needless to say, this puts 8K at the back of a pretty long queue of upgraders, no matter what broadcasters and manufacturers might desire.

In Korea and Japan, however, they're not wasting any time. The 2020 Tokyo Olympics could be a watershed moment for showcasing 8K TV in Japan and, with any luck, beyond.

But there are plenty of hurdles: content needs to be created, distribution infrastructure needs to be devised and equipment on which to watch it made vaguely affordable. There are also the not inconsiderable issues of data rates and storage – 4K is already a serious strain on the limited broadband speeds of many areas and a notorious hard disk space-hogger.

So, 8K is still far from the mainstream, even if the big TV brands are eager to try and tempt early-adopting big-spenders – and anyone in that category could do worse than check out the new TVs in store. One thing's for sure, the rapid evolution of TV technology shows no signs of slowing down, and we certainly wouldn't bet against 8K video rolling onto our screens in the not too distant future.

The best 8K TVs you can buy