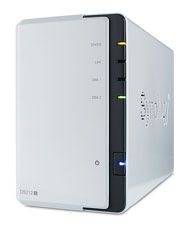 We’ve long been fans of Synology’s networked media devices, yet they’ve always missed out on that fifth star.

There were always a couple of tricky gaps in the otherwise easy set-up process. But not now.

What makes the Synology range so appealing is its multimedia feature set.

This NAS server (just add drives of your choice) works with about every streaming device around, and it will even transcode audio files for devices that can’t play the native format they’re stored in.

You can also plug a pair of USB speakers straight into the DS212j to create a music player that can then be controlled via the DS Audio iOS app.

AirPlay comes as standard
What’s more, AirPlay is also included, so you can use DS Audio to stream your entire library to any number of AirPlay-enabled players around the house.

The current global hard-drive shortage has pushed the total cost of a 2TB DS212j up to around £370, which is significantly more than some rivals, but for multimedia use the Synology is well worth stretching to.