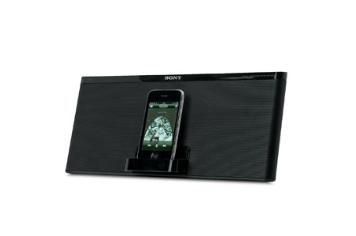 Does everything right until it comes to the sound: should be better for the money

Despite continuing to make its own – typically good – media players, Sony has accepted the iPod's dominance, and indeed offers some strong docks – including the big brother to this, the X80iP.

Having swallowed its pride to make iPod-related speaker systems and docks, though, things have fared a little better – and the RDR-X50iP gets off to a confident start.

The X50iP is ‘Works with iPhone' approved, but is mains-powered-only. It's a matter-of-fact, business-like design, but it really looks and feels as though it's been constructed with care and attention to detail, reminiscent of the style of a well cut (if somewhat generic) suit.

It takes a solid stance when placed on a desktop, and you'll have to do more than prod the buttons to knock it off its perch.

If pushing buttons isn't your thing, though, you'll be pleased to hear there's a fully functioning remote that lets you cruise your iPod's menus from a distance. There's also an auxiliary input for non-Apple portables.

MegaBass proves too much to handle
The last feature is Sony's ‘MegaBass', though funnily enough this is the last thing you'll want as even without this feature, the Sony delivers plenty of weight thanks to sadly a rather disjointed, thudding presentation of low frequencies; Kanye West's Love Lockdown highlights this as well as anything.

And disjointed is a word we come back to as we listen to this dock with a variety of tracks.

The RDR-X50iP struggles to cope when it comes to busy, layered rock songs and sounds lacklustre with dynamic, classical pieces.

We expected more at the price
Vocals are handled reasonably well and that bass weight ensures a sound that fills the room without sounding bright, but we expected more from this dock based on the size, price and Sony branding.

If you're desperate to replicate the sound of a passing Escort XR3i straight off the pages of Fast Car, then you're in luck – but for the rest of us, this is more miss than hit when it comes to sound-per-pound.