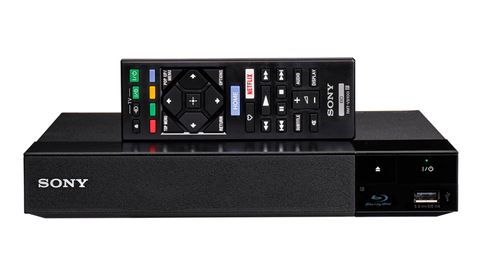 Well featured and a great performance at a superb price, the S5500 is a top budget buy

Is it just us or are Blu-ray players getting smaller? The Sony BDP-S5500, the Japanese company’s most recent budget deck, comes in at little more than the size of a hardback book, shrinking even further from last year’s already dinky S5200.

But don’t let its size fool you – this little player goes big on performance.

Size apart, Sony has also tweaked the design of this year’s players, ditching the fussy geometric Sense of Quartz design, as seen on the award-winning BDP-S5100, for something a little more straight-laced.

It’s still a lightweight bit of kit, but the change in design does make it feel more solid compared with last year’s units. There’s less shiny plastic too – a good thing for avoiding fingerprints – and the eject and power buttons placed on the front feel much more sturdy.

There’s been a bit of a makeover on the inside too. Sony has ditched the slightly fiddly XrossMediaBar interface for something a lot cleaner and easier to use.

There’s now much less scrolling, and you’ll find most of the things you want on the main homepage within one click.

Apps are presented in a “featured” tab, ordered by the most popular. You can also select your own favourites and pin them to a separate section so they’re easy to get to.

The Netflix, BBC iPlayer, Demand 5 and Amazon Instant Video apps are all on board, beacons among the usual drab filler, but there’s still no ITV Player or 4OD – a shame but far from a dealbreaker.

As on last year’s model, Netflix has a shortcut button on the small but perfectly formed remote control – though this time with the official Netflix logo (sometimes it’s the small things), while the shortcut to the Sony Entertainment Network has been replaced with a favourites button for you to store another of your most-used apps. That aside, they’re nigh-on identical.

At this price, it’s little surprise that the S5500 keeps things simple when it comes to connectivity. There’s a single USB input on the front panel for attaching USB drives, and one HDMI out on the back panel, alongside a coaxial out for older surround sound amps and an ethernet port for hardwiring the S5500 to your router.

There’s also what Sony calls “Advanced Super Wi-fi” on board, and it certainly seems snappy – we notice very little difference in load times between our wired and wireless connections, which is quite something.

Indeed, speed seems to be a consideration across the board. The S5500 features a Super Quick Start mode that boots the player up within a second. This ultimately means it’s never truly off, which does use more power, but you can switch this feature off in the menus if you prefer.

Set-up is a cinch. Plug in the S5500 and you are launched immediately into the Easy Setup menu that walks you through getting the player on your network, sets your preferences and installs any updates.

We load Teenage Mutant Ninja Turtles on Blu-ray and notice the speed at which discs loads has drastically improved on last year’s model – in fact, it’s halved. From selecting the disc, the Paramount screen loaded within around 10 seconds; it was nearer 20 seconds on last year's best budget player, the BDP-S5200.

Pictures are crisp and full of detail, with a great sense of depth and texture to the Turtles’ shells. Blacks are very slightly deeper and colours a little punchier than on last year’s model too. Switch it up to 3D and the image is convincing in its depth, with processing stable – there’s very little to fault here at this price.

Motion handling is top notch, with landscape pans smooth and sharp, and we have to give credit to the excellent contrast levels the Sony can deliver. Hand it a starlit sky or a moody night scene and it will always deliver on bright whites and plenty of shadow detail.

Upscaling from DVD is handled with aplomb – we watch the test combat scene from Robocop and the S5500 delivers crisp lines, well-balanced colours and very little picture noise. You certainly wouldn’t mind revisiting some old favourites with this.

Sonically the Sony BDP-S5500 delivers a wide, punchy and engaging performance, which pips its predecessor for excitement and balance. Voices sound more direct and there’s a better sense of solidity across the frequency range.

For such a small box, there really is a lot to love in this Sony.

From features to design and performance, it tops its Award-winning predecessor in every way. Budget Blu-ray players don’t get much better than this.