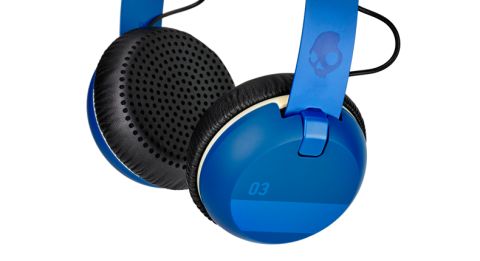 Great to look at, but not to listen to

You have to hand it to Skullcandy: its funky, multi-coloured designs are one-of-a-kind.

And for those hunting high and low for farmyard animal-themed headphones, you can now breathe a sigh of relief.

Skullcandy’s latest on-ears, the Grinds, come in a choice of ten colours including blue, purple and camo, or for more sober types, white, black and cream. You have to cough up an extra £5 for the more ‘out there’ finishes.

The Grinds don’t bend, bow or fold for ultimate portability, but they are well made and have your comfort in mind.

They’d take any neglect on the chin – just be careful not to snag the short exposed wire between the cups and headband – and we’re not convinced about the longevity of the spongy foam ear pads and soft material lining the band.

You’ll notice the absence of an in-line remote on the detachable cable, but don’t be alarmed: a microphone and single button are built-into the left ear cup, which Skullcandy says is more convenient than fumbling for a wire to answer the ringer.

While we’re all for bright designs, it’s a less attractive adjective when it comes to sound. We find that the Grind's abrupt clarity and directness comes on a little strong; borderline rowdy. Listen to Avenged Sevenfold and it’s like having a good telling-off.

Their lack of space and refinement across the frequencies, pancake flat dynamics, and sloppy timing make a mess of Muse’s Psycho – hardly coming up for air as they ambush the mash of electrics and cymbals.

The track’s tab isn’t half as penetrating as it should be, but there is decent bass presence on offer.

MORE: 5 of the best headphones under £50

Detail levels aren’t disastrous and tonally they strike a fairly even balance, but it’s hard to root for the Grinds when competitors offer much more in the way of transparency, rhythm and cohesion for the same money.