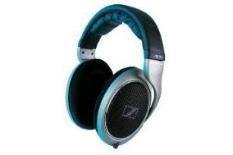 Excellent, open on-ears that will last a lifetime – but there are better at this money

Cast your mind back to our December 2008 issue, and you might just recall these Sennheiser HD 595s. They're still a fixture in the company's roster, and while we're reviewing a fresh (though well run-in) pair here, Sennheiser also sells parts for them that should ensure your purchases will have a long life.

The company actually developed the world's first pair of open headphones, way back in 1968, so a lot of experience has gone into these, also open, HD 595s, which boast features with buzzy titles like ‘Eargonomic Acoustic Refinement' and ‘Advanced Duofol diaphragm technology'.

Thankfully, you're much more likely to be impressed by the sound they produce.

Open and cohesive sound
Unsurprisingly, the open design helps create a sound with real space. Each of the disparate and often bonkers effects in The Knife's brilliant Heartbeats is afforded its own little section of soundstage, but thanks
to decent timing and tonal evenness, they also link together to create a nicely cohesive presentation.

There's impressive weight and control in the chunky bass, while the treble is refined without sounding rounded-off.

Switch to an orchestral score such as that from The Fellowship of the Ring and the Sennheisers are insightful enough to reveal the texture of the strings, as well as being dynamic enough to rise and fall with the
ebb and flow of even the most epic tracks on the disc.

Add solid build and excellent comfort, and you might be wondering why the Sennheisers don't get five stars.

In a world in which rivals from Grado didn't exist, that's exactly what they would be getting, but the fact is, good though these HD 595s are, the Grado SR80is are a smidge better in almost every way – and especially where punch and detail is concerned. And that means four stars will have to do.