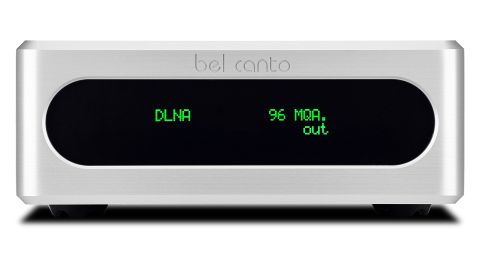 There is great value in investing in dedicated hi-fi components, but the Bel Canto e.One Stream falls short where it matters in terms of performance

It’s natural to strive towards getting the most for your money, but there is a difference between something being limited and it being properly focused on a specific task. After all, there is little gain in moving into a bigger house if the walls are smothered in rising damp.

So if you’re put off by the Bel Canto e.One Stream due to its price tag not representing the expected array of features, bear in mind that any added extras would actually divert attention from its primary task - that of delivering the best sound possible for the price. Besides, there is still plenty else to stop you buying one.

Bel Canto describes its streamer as an interface between your network and audio system, which essentially means it can bolt on to your amplifier and offer connection to a NAS device as well as hi-res streaming services such as Qobuz and Tidal. A range of digital outputs means you can bypass its on-board DAC and upgrade in time with an outboard version.

The Stream focuses on what Bel Canto considers high-quality streaming services and re-clocks the data in pursuit of ultra-low jitter. It also has galvanic isolation protection from the network and details robust power supplies to create the best signal source to network music.

In terms of file compatibility, the Stream is also pretty well equipped. It supports files up to 24-bit/192kHz, as well as MQA and DSD, and is also a Roon endpoint.

There isn’t much hugely inspiring about the design, but it is certainly functional and shouldn’t clash with anything in the room.

The display is large enough to show the information you’ll need, including sample rate and codec, and you can also configure it to scroll track information or auto turn off after a while.

Build quality is fine, too, especially given that physical contact is restricted to plugging the Stream in and the odd press of the Program button for switching between analogue and digital outputs.

All control is surrendered to the free Bel Canto Seek app, which we had a couple of false starts with during our testing, but most general UPnP apps should work fine.

That button is located on the back of the chassis, along with pretty much everything else. There’s an analogue RCA output on one side if you want to use the Stream’s DAC – and AES, Toslink and SPDIF digital outs if you don’t.

To the right are inputs for an ethernet cable and USB-A, which opens up the Stream to files you’ve stored physically, not on the network.

In terms of features, then, Bel Canto has included everything you’d expect from a product such as the Stream, without promising the world. But the key to any audio product, though perhaps even more so for such a focused component around this price, is how it sounds. That is where we feel more than a tad underwhelmed.

There are certain aspects of the Stream’s performance that let you know it's operating in this kind of ballpark, without absolutely sounding like you’re getting your money’s worth. There is space and detail you’d struggle to achieve with a three-figure budget, and the tonal balance is reassuringly even.

It’s the kind of clean presentation that makes sense of Bel Canto’s urging us to use high-quality files, eating up that added information and relaying it to us somewhat bookishly through our reference system. The Stream doesn’t attempt to inject extra bass or flatten the dimension of the soundstage to bring sounds forward. Instead, it leaves the music relatively uncoloured, and in that sense, is very much a competent piece of hi-fi equipment.

Musically, however, it is lacking. A dearth of expression and rhythmic aptitude is apparent even in a solo piano line, with impetus of leading notes relying on timbre more so than anything else. However, the more instruments are added the less an arrangement seems to make sense.

Pieces are quite poorly organised, with ancillary lines often sounding out of place due to their lack of relationship with the main structure of the track, and there’s enough slip between instruments to leave the music sounding unrehearsed. At best, the performance sounds a little untidy and lacking in excitement; at worst, it can be terribly confusing.

Compare this with the Award-winning NAD C 658 and the flaws become only more apparent. Even ignoring the fact the NAD is cheaper – and bundles in pre-amplification alongside Apple AirPlay 2 and two-way aptX HD Bluetooth – suddenly it makes our music come to life.

Those sonic elements that appeared random through the Stream are now precisely where they should be. We listen to full albums where before we’d be itching to skip halfway through a track.

Things improve when we opt for the Bel Canto’s digital connections and play though a Chord Qutest outboard DAC – the presentation is cleaner as well as a little more together. But it feels like a problem halved, rather than solved. Those issues are still present, even when almost doubling the cost of the package with this Award-winning DAC.

There is nothing at all wrong with Bel Canto eschewing the extra features present in its NAD rival, but to be considered worthy of the outlay, it has to sound at least as good. The fact that the sound quality represents the two-star difference between these products is all the more disappointing.

While we admire the company’s commitment to high-quality audio and dedicated components, it is sadly far from the mark with this one.