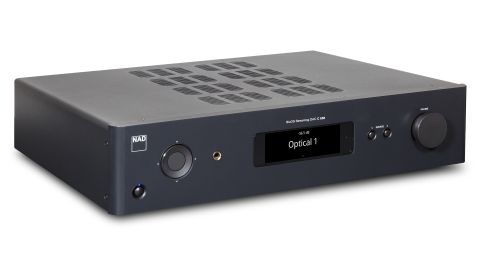 You have to feel for whoever is in charge of box-ticking in the product design chain of a music streamer. The range of desirable features available to a network streamer gets ever wider as more services, codecs and technologies continue to work their way into the vast and volatile world of streaming.

With the NAD C 658 priced at the more premium end of the market, you’d expect it to tick off most of them, which it does. A streamer, DAC and preamplifier combination, this NAD is a real Swiss Army knife of a hi-fi component.

The C 658 uses the BluOS streaming platform, which was developed for Bluesound kit and has since expanded to other brands within the Lenbrook parent company, such as NAD, and been licensed to other manufacturers, including Dali.

The platform and its accompanying BluOS app is an access point for many streaming music and radio services, including Spotify, Amazon Music, Tidal, Deezer, Qobuz, HDTracks, Napster, TuneIn Radio and iHeartRadio. It can also access local and networked music, supporting files up to 32-bit/192kHz and including MQA, of which over 250,000 tracks can be indexed.

It facilitates multi-room pairing with any other player in the BluOS ecosystem, and, thanks to a recent update, also boasts another form of multi-room and streaming for Apple devices courtesy of AirPlay 2.

The app – available on iOS, Android, Windows, and Mac OS phones, tablets and desktop devices – sets the benchmark for streaming platforms alongside those from Naim and Linn.

The BluOS app is easy to operate, with its pull-out sidebar menu listing sources and services and offering quick access to playlists and content you’ve selected as a favourite or preset. It’s a nicely designed app and reliably responsive; even switching from songs in one music service to another or to a local library is smooth.

BluOS may be at the heart of the C 658, but the NAD’s impressive features don’t end there. For one, there is two-way Bluetooth aptX HD, which allows high-quality transmission of the NAD’s audio playback to a pair of wireless headphones and, perhaps more typically, can receive tracks over Bluetooth from a smartphone or other Bluetooth-enabled source device.

And there’s plenty of opportunity to use the NAD as a nucleus of a multi-source system, too, thanks to its analogue and digital inputs, which include two opticals, two coaxials and a single USB (fed to an ESS Sabre 32bit DAC), plus two RCAs and an MM phono for hooking up a compatible turntable.

Recognising that audio industry technologies and standards are being updated all the time, NAD has taken considerable care to futureproof the C 658 through the brand’s modular construction.

Its design means that all major digital circuits can be upgraded and replaced down the line, while a future expansion of functionality can be accommodated courtesy of two Modular Design Construction slots, one of which can be filled with NAD’s now-available 4K passthrough-compatible HDMI module (£299) to facilitate the connection of, say, a game console, Blu-ray player and set-top box.

The icing on the cake is built-in support for Dirac Live room correction. Also found in NAD’s M10 and some of the brand’s surround sound machines, the calibration technology measures the acoustics of a room and optimises performance accordingly. It’s something we rarely see on two-channel kit, which we find ourselves wishing wasn’t the case.

The software analyses your room’s frequency response and generates a sonic filter, which you can save to your smartphone. The process takes around 20 minutes, however, given the amount of tweakery on offer, you may want to factor in some time to experiment.

Dirac Live calibration proves its worth during our testing, opening out the sound and giving it a livelier disposition. In its pre-correction state, the electronic jazz embodied in Muff’s Ufofka bursts onto a broad soundstage laden with clarity and subtle detail, but activating our room correction filter in the app gives it a lift. There’s more space for the cacophony of simultaneous sounds – wild drum beats, intense trumpets, pensive strings – to move, too.

The software adds an extra edge to what is already a hugely entertaining and informative performer. The Knife’s I Just Had To Die demands energy, and the NAD’s rendition shows plenty of it as it encourages the steadfast percussive beat and bubbly organ melody along. Throw it a more barren track, such as For The Morning by Tyler Ramsay, and the focus and insight of the NAD’s midrange come to the fore, providing a true sonic visualisation of the track’s meandering finger-picking and languid vocal.

We put the NAD’s phono stage on trial as we settle the groove on Pink Floyd’s In The Flesh?. That musicality and insight arise once again, and the NAD's animation and sonic heft play to the track’s stirring dramatisation. For those with plans to use the C 658 as the hub of their system, it’s good to know its quality is all-encompassing.

The NAD comes in at a price point dominated by three-time Product of the Year winner, the Cambridge Azur 851N – and it rises to the challenge. While not as rhythmically regimented as its rival, the NAD counters with an unmatched lucidity. Its impressive level of expression involves you in the music, while dynamics have a natural fluidity.

The only place where this streamer lets us down is in its physical exterior. The C 658 doesn’t exactly look the part of a high-end hi-fi component, its matte finish its asymmetrically laid out plastic controls are hardly indicative of its price tag.

The two screw-in antennas for dual-band wi-fi and Bluetooth don’t help the aesthetics either. However, the screen in the centre is useful for glancing at playback information to save you getting your phone out of your pocket. And we’ve no qualms with the quality of the NAD’s construction.

The plain, black plastic build of the remote control doesn’t exactly entice you to choose it above the control app, so you may wish set another remote in your household up to control the NAD via IR learning.

The NAD C 658 is one of the most fully furnished, future-proofed and intuitive streamers we’ve come across – and at this sub-£2000 price, one of the most convincing performers. It puts a big, bold tick in a great number of boxes. Nice work, NAD.