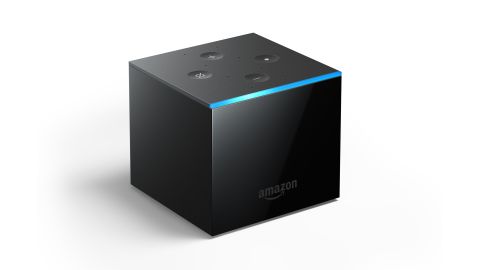 We love what we do, but collective decades of testing lend a certain degree of predictability to proceedings. That’s why it’s such a treat when a product surprises us.

While a new video streamer from Amazon might seem an unlikely candidate to deliver a surprise, that’s exactly what it’s done. As well as being a formidable streamer of 4K HDR content, it can also play the role of voice-operated universal remote control. That might not sound terribly exciting, but bear with us.

As the name suggests, this is a cuboidal device. It looks rather snazzy with four glossy sides that seemingly swallow light and a matte top panel that houses physical buttons for changing volume, disabling the integrated microphones and invoking Alexa when disabled. Dotted around these three buttons are eight pinholes that house the microphones themselves.

The edge where the top and front panels meet is actually a blue light strip that springs into life with a KITT from Knight Rider vibe when you interact with Alexa or while the box is processing a request.

Underneath, there are four small feet that raise the Fire TV Cube a millimetre or two off the surface upon which it’s placed, allowing air to get into the unit via a vent in the bottom panel. Measuring roughly 8cm cubed, it’s a pretty small device but has a satisfying weight (465g) and solid build.

On the rear, there are four connections: HDMI, micro-USB, power and an infrared socket for the long-cabled IR repeater that comes in the box. We initially assumed the IR receiver would allow you to hide the Cube out of sight, but in fact, Amazon insists that the Cube be placed within your line of sight and with its own line of sight to your TV and other kit. If your kit is hidden away, you can get signals to it with the IR repeater. That’s because the Fire TV Cube wants to control your entire system.

During the straightforward set-up process, the Fire TV Cube asks for the make and model of your TV and soundbar – owners of more complex systems with more components can go into the Cube’s settings and add those later. The process is simple and remarkably effective. In no time at all we have a rather substantial system (the Fire TV Cube itself, Sky Q, a 4K Blu-ray player and PS4 Pro all running into a Yamaha AVR and out to a Samsung TV) responding to voice commands.

Say ‘Alexa’ and the Cube mutes your sound system so your follow up command can be easily heard (though the Cube seems to have no trouble hearing the initial command), then simply say something such as “switch to satellite” and your Sky box is switched on and your TV and amplifier flicked to the correct inputs. Issue orders such as “Alexa, tune to BBC One” and it will change channels. “Alexa, go to Home Screen”, meanwhile, returns you to the Fire TV Cube’s input on your system.

This kind of thing tends to be great in theory but patchy in practice, so we’re pleased to report that its implementation here is effective and reliable. Having always found the Logitech Harmony universal remote Alexa skill frustrating to use, we’re relieved to find it’s a different story here.

Of course, the Fire TV Cube also does everything an Echo device can, such as checking the weather, adding items to your shopping list, ordering things from Amazon, setting timers, playing specific music tracks and checking random facts from the internet. It is all possible using only your voice.

While all of this voice control is an excellent differentiator for the Amazon Fire TV Cube, it’s probably not reason alone to buy it over a competitor such as the Apple TV 4K. It still needs to be a capable video streamer.

It certainly looks the part. The app selection is strong for starters – Amazon Prime Video takes centre stage, and Netflix is on board, too. All four of the UK’s major catch-up apps are here, Plex and VLC handle the playback of your own files, and music streaming is catered for by Spotify, Tidal, Deezer and Amazon Music.

Since launch, the Apple TV app has been added, too, giving access to the new Apple TV+ streaming service and, much more importantly, the biggest library of pay-as-you-go 4K movies available anywhere.

Our only slight issue with the Fire TV Cube's app offering is the lack of Now TV.

The Fire TV Cube is, of course, a 4K streamer, and it offers HDR in HDR10, HLG, HDR10+ and Dolby Vision formats. The Apple TV 4K, by comparison, doesn’t support HDR10+. Right now, that’s not a big deal as there’s not much HDR10+ content to get excited about, but it could be a consideration in future.

It’s a significantly more powerful device than its stick-shaped siblings, boasting a hexa-core processor as opposed to a quad-core chip, and a little more RAM, too. Importantly, it feels snappier and slicker than even the Fire TV Stick 4K.

Kicking off with the new, second series of Jack Ryan on Amazon Prime Video, we’re impressed by the Fire TV Cube’s delivery. Streamers can often come across as computer-like in their delivery, with rough edges and blocky colours, but the Cube is a much more sophisticated device that’s in the same league as the excellent Apple TV 4K.

This is a performance with plenty of HDR-enhanced punch, but also effortlessly natural and balanced. Skin tones are spot-on, with organic warmth and subtle shading, while strong detail levels ensure every strand of John Krasinski’s beard is sharply drawn. We’re not talking 4K Blu-ray levels of nuance and subtlety, but for a reasonably-priced streamer, the performance is impressively mature.

Switching to Stranger Things on Netflix, we’re delighted by the dramatically deep blacks, but it becomes clear that the Fire TV Cube lacks some of the dark detail dug up by the Apple TV 4K. It’s a long way from impenetrable blackness, but keeping track of the goings-on in The Upside Down is easier via Apple’s device.

The Apple TV 4K proves itself slightly sharper too, as well as a better handler of motion. There isn't a huge difference, but the Apple device is just a touch crisper and a fair bit smoother in its delivery of panning shots and tricky movement.

But the Apple TV 4K is more expensive than the Amazon Fire TV Cube – there’s currently £70 ($60) between the two devices – so you’d expect it to be the better performer. The fact that it’s not a night-and-day comparison confirms that Amazon has done a good job here.

We begin our assessment of the Fire TV Cube’s audio capabilities using music rather than a movie soundtrack, and we’re instantly engaged. In stereo, this is a punchy and attacking delivery that the Apple TV 4K can’t match. There’s a verve and vigour, a crispness, that grabs the attention.

Switch to a film and that taut approach to sound is rewarding once again. For detail and clarity, this is among the best streamers out there, though the comparative richness and weight of the Apple TV 4K has its own rewards. Ultimately, while the Fire TV Cube sounds perfectly good in isolation, its effects are a little isolated from one another and don’t form quite as coherent a whole as those delivered by its more expensive rival.

We started testing the Fire TV Cube expecting to find a decent video streamer, but to discover that it’s also a rather effective voice-controlled universal remote is a nice surprise. It may struggle with some products and systems out there, but in testing, we were delighted by this value-added feature.

Even without Alexa voice control of your home cinema system, the Fire TV Cube is a very good video streamer. Ultimately, the Apple TV 4K offers a better picture performance, but the Cube isn’t far behind. Given its lower price, that’s very impressive indeed.