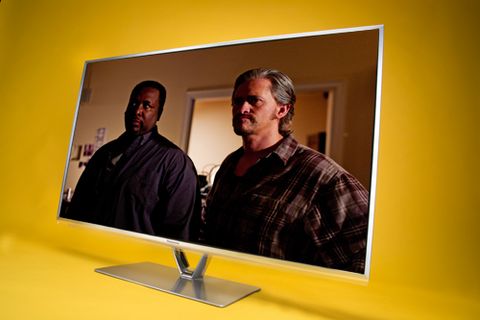 Not a class leader, but a likeable TV with a fine picture and a great set of features

If we’re honest, we’ve never completely understood this alphabet model-number system, but price tells all, and it shows that the 42in Panasonic TX-L42FT60B sits somewhere between the middle and top of the Panasonic 2013 LED TV range.

The Panasonic TX-L42FT60B is a stylish looking TV, much more attention grabbing in its design than its GT60 plasma sibling.

Its slim bezel, finished in shiny silver – Panasonic’s 2013 colour of choice – sits on a prominent V-shaped support that swivels slightly. It’s not the most ostentatious 42in TV we’ve seen, but it definitely has no intention of blending in with the rest of your furniture.

The Panasonic FT60's connections, at least, seem fairly standard. There are three USB ports, and one each of component, composite and RGB Scart inputs. There’s also an SD card slot, a headphone jack, and an optical output.

There’s an ethernet port for internet, but you can also connect via wi-fi. It’s slightly odd that Panasonic has chosen to provide just the three HDMI inputs on many of its sets this year – in 2012 four was par for the course.

The main feature across all the 2013 Panasonic Smart TVs is ‘My Home Screen’. This is a hub of smart features, with a twist. As with offerings from Samsung or LG, you get your TV content and app content all in the same place – but you get to lay it out according to personal taste, and what you want to use.

Building your own home screen is easy to do, and even mildly fun to boot. Panasonic’s smart interface has gone from a ‘me too’ runner-up to one of the most functional and satisfying online experiences around.

Only one remote control handset comes with this FT60 model. It’s a large, conventional unit similar to the ones Panasonic has been shipping for years. Covered in large, responsive buttons (one of which makes everything glow red to let you see in the dark), it’s easy to use.

For those who want something a little more fitting for the 21st century, there’s the Panasonic Viera Remote 2 app for smartphone or tablet. It has as many sections as the TV’s comprehensive menus, but they’re divided in a nice, orderly fashion.

The Viera Remote 2 app offers you the same controls found on the physical remote, but adds a keyboard and hotlinks to ‘My Home Screen’, Apps and the TV guide. We really like the Smart Calibration tool, where Panasonic’s list of picture adjustments can be tweaked, and the ‘Swipe & Share’ function, which lets you drag TV content to your phone or tablet, and vice versa.

There’s also a free-form Pad Control screen in case you’re tired of directional keys, as well as a button to activate voice control. We easily managed to talk the TV into changing channels and mute whatever was playing, which puts it ahead of the game for some rivals. It’s still more of a novelty than a life-changing timesaver, but we’re getting there.

Overall this is Viera Remote app is the best TV control app we’ve seen so far: it’s rich in features and laid out in an intuitive manner.

Before diving into picture testing, we went through our usual THX Optimisation process. Configuring this TX-L42FT60B TV is a swift task – Panasonic seems to occupy that sweet spot between plug-and-play simplicity and in-depth fiddling. Menus are logical and easily navigated, and it wasn’t long before we had a picture we were happy with.

We start off the test proper with broadcast TV, and tune in just in time to catch someone making a trifle on This Morning. Motion is handled well and colours are natural, although we would prefer more subtlety in shading. Contrast is good, but this Panasonic FT60 seemed uncomfortable with extremes, struggling a little to balance deep blacks and bright whites in the same frame. In bright scenes, however, it’s fine.

Switch to a DVD of Return of the Jedi and the Panasonic shows itself to be a good upscaler, with a nice amount of detail. The opening yellow text is a good test for any TV and here we scroll into a galaxy far, far away without any kind of juddering. There’s a good balance of colours: well judged and punchy, but not showy. The blacks, however, can be a little washed out in the darkest scenes on this 42in Panasonic.

Moving over to Blu-ray, we get a similar performance from the TX-L42FT60B, only with the benefits of a higher resolution. Detail levels are impressive: well defined but not overly etched. It still can’t quite handle a lot of black and bright whites at the same time, however.

Finally, we hit 3D with a Blu-ray of Life of Pi. The Panasonic FT60 is a passive 3D set, so there’s no hint of flickering from the comfortable glasses. The sense of depth is superb, with the layering effect less artificial than on a lot of other passive 3D TVs. We’d like a bit more detail and a bit more of a pop-out quality, but that’s more active-shutter territory, which can bring additional eyestrain. As it is, this is an impressive 3D performance, and one of this Panasonic set’s strengths.

As we’ve seen with last year’s Sony HX853 TVs, there’s been some effort to improve the sound quality of flat-screen TVs. Sadly, this Panasonic sounds like most of its rivals: a bit thin and in need of a boost in punch and detail. Fiddling with the bass levels helps, but there’s nothing to stop it from being a lightweight presentation short of getting some speakers or a soundbar.

The TX-L42FT60B5 is a solid effort from Panasonic, even if this TV doesn’t quite have what it takes to really stun. It does a good job in a lot of areas, and its wealth of smart features help to soften the blow of some of its flaws.

If you want a nicely styled LED TV with a fine picture performance and one of the best online experiences around, this deserves your attention.