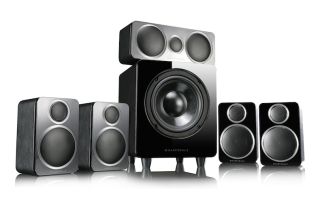 A lot has happened to the home cinema market in the six years since we first praised Wharfedale’s DX-1HCP speaker package: soundbars have moved the must-have goalposts for TV sound, and Dolby Atmos has literally taken surround-sound to new heights. Both even exist together, thanks to Atmos-enabled soundbars.

But Wharfedale hopes it can lure customers without room for or inclination for an imposing speaker package away from soundbars and the like, and into the arms of the DX-2.

Comprising four satellite speakers (for front and rear channels), a centre speaker and active subwoofer, this 5.1 system is a diminutive. This time around it features finely tuned drive units, a more powerful active sub and improved cabinet design.

The WH-D8 sub, meanwhile, has a 20cm long-throw bass driver powered by a 70-watt amp.

The Wharfedale DX-2 is initially available in black, with a white finish expected later. It's available from next month. Anyone wanting to expand to a 7.1 system or beyond can pick up extra pairs of satellite speakers for £100 a time.