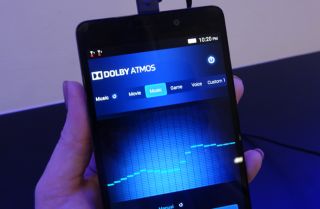 We start with news that the Audio Engineering Society, based in New York has agreed on a standard for binaural and 3D personal audio industries, such as Dolby Atmos for mobile.

The AES69-2015 standard, as it’s been named, claims to define a new file format that will “exchange space-related acoustic data in various forms”.

These forms include Head-related Transfer Functions (HRTFs) and directional room impulse responses (DRIR). What’s more, the new format is designed to be scalable and flexible so that it can work with various rendering processes.

Read more: Dolby Atmos for mobile - everything you need to know

The BBC has introduced cross-device syncing to its iPlayer app. The update means users can see favourited content and viewing history across a range of devices - though the facility is currently limited to the Android and iOS apps, and the web-based version of the service.

Users will need to register and sign-in with a BBC iD to make use of the new feature, but won’t need one for regular viewing.

The announcement came from head of BBC iPlayer Dan Taylor-Watt on Twitter.

The BBC has yet to confirm if the new feature will make its way to other platforms.

You’ve probably seen the Russian meerkats grace your TV, advertising Compare the Market. The insurance company is now offering 2-for-1 cinema tickets on Tuesday and Wednesdays for people who purchase a qualifying product.

Customers can then redeem the 2-for-1 offer through a companion Meerkat Movies app for iOS and Android.

Microsoft has also been updating apps, with the Xbox Music app now allowing users to stream files stored in the Music folder within OneDrive.

Tracks will be accessible from Windows devices, Xbox 360 and Xbox One, and OneDrive has a storage limit of 50,000 tracks.

The new service will work in tandem with Xbox Music Pass, Microsoft’s subscription-based streaming service. Users will be able to create playlists with songs from both OneDrive and Xbox Music Pass.

Microsoft has also announced that anyone who signs up to Xbox Music Pass will receive 100GB of OneDrive storage.

Naim Label has announced a “new breed of compilation”, which will “showcase some of Naim’s favourite recordings from the last few years.”

Collected_01 will be the first album in the series, and will feature a range of musical styles from jazz to indie rock, to electronica.

The new compilation will be available as a physical copy on 11th May, or can be downloaded in high-definition from Naim’s website for £10.

Naim has also produced a limited run of 1000 hand-numbered copies on double 180 gram LPs. The limited edition LP or standard CD can be pre-ordered here.

A full list of tracks available on the album can be found here.

MORE: High-resolution audio - Everything you need to know

If you like your smartphone to have a true personality, LG’s AKA phone may be of interest. After seeing good sales in Korea since late 2014, LG has announced it will bring the phone to more overseas markets.

The AKA phone has four different "personalities" - and colours - available.

There’s Eggy, a yellow phone who “falls frequently in love”, the “ever-so-impulsive” Wooky, in white, “music-loving” Soul in navy, and pink Yo-Yo, “always on a diet”, apparently. The different personalities are represented through wallpapers, widgets and ringtones, and have animated eyes when used with a compatible case.

The AKA has a 5in 720p display, 1.2GHz quad-core processor, 1.5GB of RAM and 16GB of internal storage with microSD card expansion.

The service, recently bought by hip-hop business mogul Jay-Z, will relaunch solely as Tidal on 30th March around the world. It will continue to offer a catalogue of 25 million tracks, 75,000 high-definition music videos and curated editorial content.

Tidal is also integrated into a number of home audio products, including Sonos, and most recently Meridian's Sooloos system.