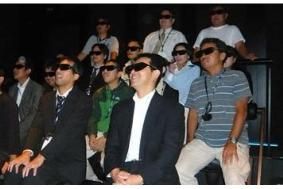 And they're not even put off by the need to wear special glasses to watch.

The survey, carried out by the US Consumer Electronics Association and the Entertainment and Technology Center at the University of Southern California, shows that nearly 41m US adults had seen a 3-D movie at the cinema in the past year, and that 40% of those would rather watch a movie in 3-D.

Not surprisingly, only 23% of those who hadn't seen 3-D movies favoured watching in this format.

16% of consumers surveyed are interested in watching movies or TV shows in 3-D at home, and 14% want to play 3-D games, and more than half of those responding said they wouldn't be deterred by the need to wear special glasses or hold their heads still to enjoy 3-D. They'd still buy a 3-D TV.

What will influence them is content availability: nearly 30% said having access to 3-D content though cable, satellite, fibre optics or over-the-air broadcasts influence their decision to buy a 3-D capable TV.

And they'll pay for the privilege: nearly half indicated they were willing to spend
more for a television capable of displaying 3-D content, and 15% said they would spend roughly 25% extra for such a TV.