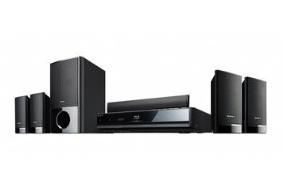 Sony UK has today confirmed we'll be getting the BDV-E300 and BDV-Z7 Blu-ray home cinema in a box systems here in Blighty, but not the BDV-E800W model available in the rest of Europe.

We covered the launch of two new speaker systems to accompany the Sony BDP-S360 Blu-ray player back in April, and now Sony has announced seven Blu-ray home cinema systems to join in the fun.

Three integrated cinema systems, including one 2.1 system, are complemented by four systems based around the BDP-S360 Blu-ray player.

Both systems offer 1000W of Sony's S-Master digital amplifier power and are BD-Live, 24p and x.v.Colour compatible. Dolby TrueHD and DTS-HD Master Audio decoding is on board, too.

Virtual 7.1 surround sound
The systems have Sony's Virtual 7.1-channel sound but for a genuine 7.1 set-up there's the WAHT-SBP1 wireless upgrade kit, which comes with an amplifier and two additional speakers.

These three Sony Blu-ray home cinema systems are due out at the start of September.

With a 350W power output, BD-Live, 24p and x.v.Colour, Full HD video with the latest HD audio codecs, 1080p upscaling for DVDs, BRAVIA Sync and a Digital Media Port, it certainly packs in the features.

The HT-SS100 boasts 1000 watts of power, five compact satellite speakers, and is wireless-ready, allowing cable-free operation of the rear speakers with an optional amplifier model.

Lastly, the HT-SS360 takes the same concept and partners it with four floorstanding speakers for the front and rear left and right channels.

All these four cinema systems should be in your stores any day now. We'll be bringing you a review of at least one of the new Blu-ray cinema systems in our November issue, out September 16th.