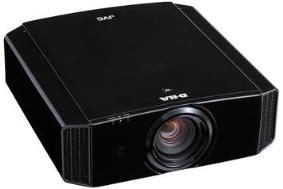 After first breaking cover at the Manchester Home Entertainment Show, JVC has confirmed details on the three new 3D projectors.

Claiming "native contrast ratios that are unmatched in the industry", the three models are due in November and will come boxed with a set of glasses and a 3D signal emitter.

This emitter has tended to be found inside the TVs we've seen, though some companies, such as Sony, have also offered TVs with external emitters.

The DLA-X3, DLA-X7 and flagship DLA-X9 will come with one pair of JVC's PK-AG1 3D glasses, which will otherwise retail separately for £160.

A PK-EM1 3D signal emitter will also come as standard and syncs the projected image with the glasses. It's also available on its own for £70.

Read more about the new 3D projectors from JVC, and others, in the December issue of the magazine.

Exciting news from JVC: it will be bringing its new range of 3D-ready D-ILA projectors to the Manchester Home Entertainment Show running from October 16th-17th.

Brightness has also been increased to 1,300 ANSI Lumens, and JVC's double-speed Clear Motion Drive has been further improved to reduce motion blur.

A glossy black cabinet is standard on all models, with white available as an option on the DLA-X3. In the UK, JVC's PK-AG1 active-shutter 3D glasses and PK-EM1 3D signal emitter will both be included as standard.