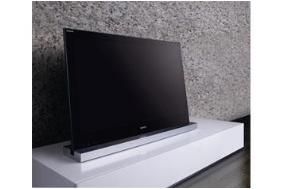 The Essential range will include value features such as built-in DVD or Blu-ray players, while the high-end Signature TVs are 3D sets.

Similarly, the required 3D transmitter will be standard on the top-end Signature TVs, but optional on the 3D-ready Cinematic and Presence models.

Perhaps most surprising is the fact that the Bravias look distinctly different to traditional Sony Bravias with a 'monolithic' design alongside a six-degree backwards tilt which is, according to Sony Chairman Sir Howard Stringer, designed to address the issue of TV stands being too low in many households.

The new monolithic design concept is also used for Sony's new range of BD players and home cinema systems, which are all part of the same sleek family.

New 3D channels on the way
Continuing the 2010 3D TV push, Sony showed a 3D clip of the forthcoming BD release of Jimi Hendrix at Woodstock.

The archive looks excellent with a real depth to the crowd and stage, perhaps the most natural showcase for the format we've yet seen.

In other 3D content release news, Sir Howard Stringer also revealed two new 3D channels would be launching in association with Sony – Discovery 3D and ESPN 3D. You can read more about the Sony/Discovery/IMAX venture in our News story.

Sony again confirmed that the World Cup would be filmed in 3D and also that a Blu-ray disc of the event would be released, although no specific details were revealed.

In short, Sony says it will "take the lead in 3DTV and no-one should be in any doubt where we're heading".

The Entertainment Database Browser from Gracenote allows you to seach for directors and actors online too, like an instant IMDB.

PS3 owners will be delighted to know that a forthcoming firmware update will mean the PS3 can play 3D films and games as standard.

And the PlayStation network, also known as PSN, will be rolled out to devices other than the PlayStation 3 with movie downloads available for wireless devices and Sony's new 'Dash', which is billed as a 'personal internet browser' and is like a larger, chunkier iPod Touch.

As CES continues, we'll bring you more on Sony's comprehensive line-up and more news directly from the show floor including some OLED 3D prototype TVs.