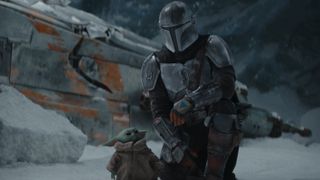 Disney has dropped the trailer for the second season of The Mandalorian. The series follows everyone's favourite bounty hunter from the Star Wars franchise on his quest to protect the Child (aka Baby Yoda), who he procured in the first series.

Set after the collapse of the Galactic Empire, it stars Pedro Pascal in the title role, along with Gina Carano, Carl Weathers and Giancarlo Esposito.

Season one was and still is one of the jewels in Disney Plus' crown. Star Wars is a huge cash cow for Disney, and with its devoted legions of fans, any new series set in the Star Wars universe is big news. The Mandalorian won plaudits for its episodic nature, as well as its family-friendly blend of action/adventure and wry humour. Expect more of the same in season two, which premieres on Disney Plus on 30th October.

Disney Plus: price, films, shows and how to get a free trial