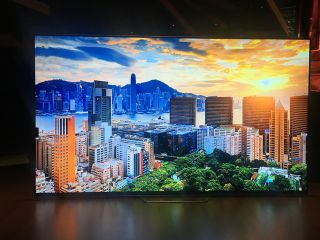 If there's one black mark against Sony's televisions and Blu-ray players, it's the lack of dynamic HDR like Dolby Vision. This type of HDR technology, which adapts the picture frame-by-frame to give you the best possible colours, usually provides a more realistic image than normal HDR 10. As such, it's absense on high-end AV kit is noteworthy.

While Sony has been promising to update its kit since January 2017, only now has the process begun. But viewers' pleasure was fleeting as (according to John Archer writing for Forbes), the update doesn’t appear to support Dolby Vision playback over HDMI or USB.

So if you have a Dolby Vision-capable player, such as the Cambridge CXUHD, or a compatible streaming box like Apple TV 4K, you're out of luck unless you're using a built-in app like Netflix.

According to Archer, Sony has removed all mentions of Dolby Vision from its latest patch note, and apparently started issuing another update that removes the limited Dolby Vision support altogether (although that remains unconfirmed).

Asked for comment, Sony said: “[The] Dolby Vision support software update has not started yet in Europe and we will release details of what functionality will be supported at the same time as the software update."

We can speculate on a number of reasons why the Dolby Vision update might not work. One possibility is the televisions implemented a new version of Dolby Vision that might be incompatible with those on older devices. Or maybe there's a bug in using HDMI that Sony is trying to fix. Those certainly seem viable theories, and must surely be preferable to the possibility that Sony televisions simply can't handle Dolby Vision.

And since Samsung has control of the other dynamic metadata format HDR10+, right now Sony is high and dry.

2018 Winter Olympics to be made available in 4K HDR