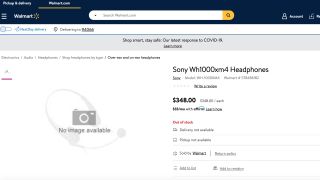 A few weeks ago we brought to you a sighting of the upcoming Sony WH-1000XM4 in Walmart's inventory, plus a price - $348 in case you didn't know. And now the same retailer has leaked what appears to be a comprehensive list of the features we can expect to see.

Sony's new wireless noise-cancelling headphones look set to be unveiled later this year and we now have an idea of the bells and whistles that you'll get as part of their new headphone package.

Naturally, the blurb states the WH-1000XM4s will deliver, 'Industry-leading digital noise cancellation'. They'll also offer 'Ambient sound control', which is something available on the current WH-1000XM3 model. It also looks like they'll be lighter than the current pair, as the wording mentions a 'lighter-weight design'.

Their 'multipoint connection' will allow you to pair two Bluetooth devices to the headphones at the same time, which should make switching from a smartphone to a laptop a more seamless experience.

The biggest new feature in our eyes, though, appears to be a new Sony DSEE Extreme processor. The current WH-1000XM3s use Sony's DSEEHX processing to upscale compressed digital audio, but it appears this new processor in the WH-1000XM4 will use new Edge-AI tech. This has been co-developed with Sony Music Entertainment to analyse and upscale files in real-time.

Sony claims the processing will, "restore the high-range sound lost in compression for a richer, more complete listening experience". The listing also reveals the headphones will use 40mm drivers and will support high-resolution audio.

It looks like battery life will remain around 30 hours, while the headphone's quick-charging feature should still give you five hours of juice in 10 minutes.

Touch controls make a return for the new WH-1000XM4, and it looks like the Sonys will also include new technology to increase call quality. According to the listing, it's called 'Precise Voice Pickup Technology'. This uses five mics and clever processing inside the headphones to deliver clearer call quality.

Finally, Adaptive Sound Control is a feature that's already available on the WH-100XM3s. It detects your activity and adjusts the ambient sound settings to suit. However, according to the Walmart leak, this feature can also now learn to recognise locations you frequently visit and tweak the sound accordingly.

So there you have it. We've only had a few leaks for the Sony headphones up to now, but this leak – still available to see on the Walmart website at the time or writing – gives us juicy details for what will be one of the biggest headphone releases in 2020.

All we need now is an official launch date and a review sample and we'll be able to see if they're a worthy addition to our list of the best wireless headphones and best noise-cancelling headphones.