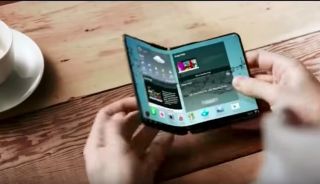 It’s no secret that Samsung has been working on a foldable smartphone for years. Last September, it looked likely that the much-anticipated handset would be unveiled in 2018, and despite strong suggestions that the release date won’t be until ‘early 2019’, Samsung looks to be on track to reveal solid details before the year is out.

Speaking to CNBC, Samsung CEO DJ Koh hinted that the foldable phone could be unveiled at the company’s Developer Conference in San Francisco in November.

If that’s the case, it will be a welcome announcement for Android fans following the hoo-ha of the iPhone XS September launch.

Koh admitted that while the development process for the bendy phone has been "complicated," the company has "nearly concluded" it.

The handset has been codenamed 'winner' – a good omen, perhaps? – although, as per previous reports, it’ll more likely be called ‘Galaxy X’ on release.

The prototype supposedly has a 7in screen and can fold in half ‘like a wallet’. When folded, the device will also have a smaller visible front display, with cameras on the back. Patents have previously suggested it could be closer to the size of a tablet than a phone, which the reported screen size does nothing to counter.