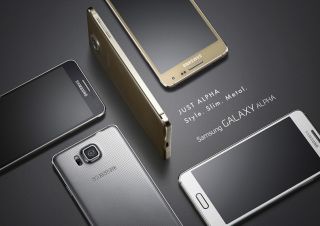 Many see the Galaxy Alpha as Samsung's answer to the upcoming iPhone 6 because of its use of a metal frame, ditching the plastic build of previous Galaxy smartphones including the Galaxy S5. It does, however, still feature a soft-touch rear panel.

The new smartphone features a 1280 x 720 Super AMOLED display, either a 1.8GHz octa-core or 2.5GHz quad-core processor as well as 2GB of RAM. It also supports Cat 6 LTE connectivity, which means it can deliver up to 300mbps internet speeds. It also sports 32GB of onboard storage but unfortunately no microSD card expansion port.

A 12-megapixel camera can be found on the back. This features real-time HDR, meaning users can see light balancing on the screen before a photo is taken. A standard 2.1-megapixel camera is on the front. A 1850mAh battery rounds off the tech specs.

The Samsung Galaxy Alpha will be available from September running Android 4.4 Kit Kat. It will arrive in Charcoal Black, Dazzling White, Frosted Gold, Sleek Silver and Scuba Blue finishes. Pricing details have yet to be announced.