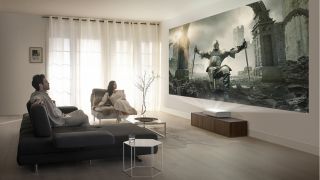 The ultra short throw model is the world's first laser projector to support HDR10+, the Dolby Vision-rivalling dynamic HDR format that Samsung created in 2017. That support, in addition to its 2800 ANSI lumens peak brightness, means it should be able to take advantage of a wider, more nuanced colour spectrum offered by HDR10+ material.

The Premiere is also modish in its support of the new Filmmaker Mode – not hugely surprising considering the technology's presence in Samsung's 2020 QLED TVs.

The only projector in Samsung's burgeoning lifestyle AV range, The Premiere comes in two flavours: the LSP9T, which can produce a 130-inch display, and the LSP7T, which is capable of beaming an image up to 120 inches.

Its ultra short throw design means it can be placed very close to the wall it is projecting onto, and a compact footprint further helps state its claim as an easy machine to accommodate.

It's smart, too, equipped with Samsung's Smart TV platform for direct access to streaming video apps such as Netflix. And, for those who aren't planning on hooking The Premiere up to a sound system, it has built-in woofers and Acoustic Beam surround sound processing.

Samsung's The Premiere is expected to launch in the US and Europe later this year, although pricing and a release date are yet to be confirmed.

IFA 2020 Special Edition: news, highlights and what to expect from this week's show