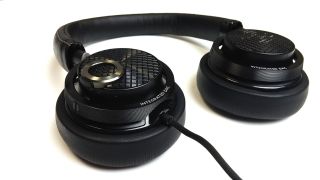 If you listen to music on your iPhone or iPad, it’s digital, whether it’s stored on the device or streamed. But to actually hear it, it needs to be converted from ones and zeroes into an analogue signal, which ends up being transformed into sound-waves in the speaker. The later in the pathway this digital-to-analogue conversion happens, the better, because a digital signal’s integrity is easier to preserve than an analogue one.

It usually takes place in the playback device – the smartphone or tablet – courtesy of a digital-to-analogue converter (DAC). The analogue signal then gets piped out via the headphone jack, up the cable and into your ears. Ample time for degredation and interference to creep in.

That’s why the Philips M2L headphones don’t have a conventional 3.5mm jack in sight. Instead there’s an Apple Lightning connector, which hooks up to the iPhone 6 and other Lightning-enabled products to take the digital signal right up to your head. Then a DAC in the ear-cup takes care of business.

What’s in the box?

The headphones themselves and a soft drawstring carry case. There’s no need for detachable cables, airline adaptors or USB chargers here – everything is handled simply by your iPhone or iPad.

The Lightning connector is the obvious thing. The cable is hard-wired into the right ear-cup and has a ridged finish to help prevent tangling. There’s no inline mic or remote, but there are playback controls on the headphones themselves. Press the right-ear-cup to play, pause, skip forward and back, fast-forward and rewind, and use the small, sprung jog-dial to change the volume. The internal DAC, meanwhile, converts all audio to 24-bit/48KHz.

The enclosures house 40mm neodymium drivers, and feature acoustically sealed cushions and memory-foam ear-pads. They’re breathable and made from lightweight material to disperse pressure and heat for long listening sessions. The headband is a leather affair that’s designed to stay in place while you move, while remaining comfortable if you’re embarking on a music marathon.

The M2Ls don’t collapse in on themselves, but they do fold flat thanks to pivots on the enclosures, while Philips’ signature numerical sliding adjusters let you find a good fit.