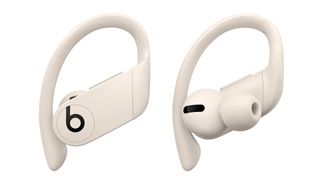 There's no shortage of headphone deals to choose from during Black Friday, but some discounts are harder to come by than others.

Take the Beats PowerBeats Pro. These headphones have been hanging around at the £320 mark since they were launched earlier in the year. But, you can now pick up a pair with a tidy £30 saving. We've seen the deal at Amazon, Currys PC World and John Lewis.

You can find other pairs of true wireless earbuds that sound better, but few boast the battery life or feature count of the Powerbeats Pros. This makes them a tempting choice, especially if you're in the market for a pair of wireless sports headphones for the gym or running.

Also, if you're an iPhone user, these headphones makes a lot of sense too - the fact they use Apple's H1 chip ensures a robust connection and easy pairing.

Okay, so they don't produce the most exciting of sounds, but they aren't bad, and if you want a pair of earbuds that won't fall out during that final set of burpees, this £30 saving surely makes them more attractive?