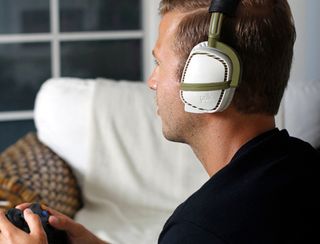 US-based Polk Audio has announced that the new 4 Shot Headset for Xbox One – the first Xbox One compatible headset to go on sale – will be available to purchase this month.

Due to hit shelves on 6th March, the 4 Shot was developed by Polk in conjunction with Microsoft Studios at 343 Industries and Turn 10 Studios – creators of the Halo and Forza Motorsport franchises.

The new headset has been designed to provide gamers with real, balanced audio representative of the virtual world and features proprietary Polk Optimized Electro-acoustic Tuning.

Gamers using the 4 Shot for Xbox One are immersed in a realistic sound environment, which also connects to wireless Xbox One controllers to give them the freedom to move around.

MORE: See all our headphone reviews

Polk says the new headset's dynamic lossless technology will result in fewer latency issues, while a retractable near-field microphone will let users chat with other gamers or make calls.

The Polk 4 Shot for Xbox One will retail in the US for $160, while UK retailers including Argos and others are advertising the new headset for around £140.

It was recently revealed that the price of the Xbox One had been cut in the UK to £400, with the console appearing to struggle to match the sales of its rival, Sony's PS4.