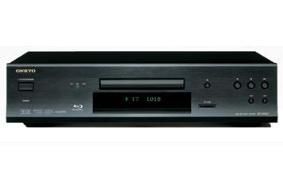 The set-up consists of the BD-SP807 Blu-ray player, PR-SC5507 AV network controller and the PA-MC5500 nine-channel power amp. All three components have been tested and approved by THX.

Starting with the Blu-ray player, it's Profile 2.0, equipped with a 297Mhz/12-bit video DAC from Analog Devices (ADV7340), 1080p upscaling, 192kHz/24-bit audio DACs for all channels and bitstream output of Dolby TrueHD and DTS-HD Master Audio soundtracks via HDMI.

An SD card slot on the fascia allows viewing of downloaded movies, music and stills.

Nine-channel power amp
Partnering the BD-SP807 is the 26Kg PA-MC5500 power amplifier. Its nine channels deliver 220W into 6 ohms and Onkyo claims its decision to use analogue rather than digital amplification "achieves a full-bodied and musical sound quality".

An HQV Reon-VX chip provides upscaling of all sources to 1080p over HDMI, as well as analogue component video upscaling to 1080i.

There are seven HDMI, three component video and six S-Video/composite inputs, as well as two HDMI outputs and a USB input.

The PR-SC5507 network controller is available now for £1800, the Blu-ray player and PA-MC5500 power amp will follow in February and March respectively. Prices to be confirmed.